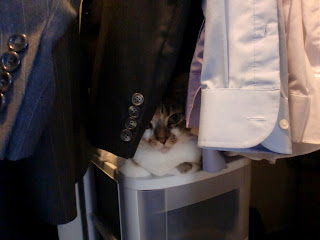 The poor Cay-Cay kitty has been traumatized lately. She's made three trips to the vet's office in two weeks. She knows now that every time the cat carrier comes out that she's headed somewhere she doesn't want to go. She's a cat, not stupid.

Cayenne has had an ear infection for a few weeks now. It was nothing to be concerned over, but we needed to have it taken care of. The combination of my allergies, Sadie's allergies and some family members' allergies have made it necessary for us to return her to the shelter we got her from. It has been absolutely heart-breaking, but for the health of all involved, it has to be done.

So we had Cay's physical done and got all check marks on everything except her ears. She has always had some build-up in them, but she doesn't scratch them or clean them too much. If you didn't see it when you're cleaning them, you'd never know she had a problem.

But in order to accept her back, the shelter said she had to have a completely clean bill of health...and an ear infection doesn't say "healthy." So we've been giving her ear drops for two weeks. Have you ever tried to give ear drops to a 12-pound cat? I can do it on my own, but I can show you the scratches - my battle wounds! We found it was easier if Danny picked her up, held her back legs in place, and let her hang her head over his arm. It may have looked a little funny, but it was so easy at that point to fold her ear back and get the drops in.

There were two funny parts to this whole scenario. The first was when she heard the "pop" of the lid to the medicine. It had to be kept in the fridge in this little pop-top bottle. As soon as she realized it wasn't food I was getting out of the fridge, she high-tailed it for the furthest corner of the house she could manage. The only way to get her to come back was to save this whole process for dinner-time and then bribe her with the promise of food. She'll come running for that!

The second part, which I could never get a decent picture of, was the look on her face after the drops. She would shake fiercely, then tack her ear down to the side of her head. She looked like a clock with hands at 9 and 12...so sweet and so miserable all in one shot. Can you bless a cat's heart?

But now we're done with drops and she's got a clean bill of health. Now we're just waiting to hear from the shelter about when they have an opening to take her back. In some ways I need her to go - for my allergies, my clean house and the health of my loved ones. But I'm not ready to let go of cuddles on the couch, the bundle of fur at the foot of the bed and the purr that's ready whenever I need it. Just pray for peace in my heart over this decision.

And if you'd like a beautiful cat that can sit on command, will sit up like a prairie dog, thinks she is a puppy and will give unconditional love 99% of the time, let me know and I'll tell you how to get in touch with our shelter. She's going to get a forever home, of that I'm certain. I just hope it's with someone who will love her half as much as I do.
Pets

May 25
Today’s reading:Job 19-22
Thought for the day: What prophetic words, as Job wishes that his testimony would be written in a book for others to learn from. How amazing that God has preserved His word so perfectly that we're learning from Job and his friends so many centuries later.