Showing posts from June, 2014
Show all

The 'I Wills' of the Psalms

June 30, 2014
In the 1860s, Philip Bennett Power wrote a book about the "I wills" of the Psalms. If you look through your Bible or do a search in your Bible program for "I will," you'll find more than 140 times this combination is used. Going through these verses, written by David, the man after God's own heart, it's an incredibly convicting experience. When put in perspective like this, they give a very practical picture of exactly what God expects from us. Here are just a few that really spoke to my heart. I will praise the LORD according to his righteousness ... (Psalm 7:17) I will be glad and rejoice in thee ... (Psalm 9:2) I will sing unto the LORD ... (Psalm 13:6) I will love thee, O LORD, my strength. (Psalm 18:1) I will give thee thanks in the great congregation ... (Psalm 35:18) ... I will call upon God ... (Psalm 55:16) ... I will trust in thee. (Psalm 56:3) It's also fascinating how many of these are repeated, and anything repeated i
Post a Comment
Read more

Brats And Chicken Over Rice 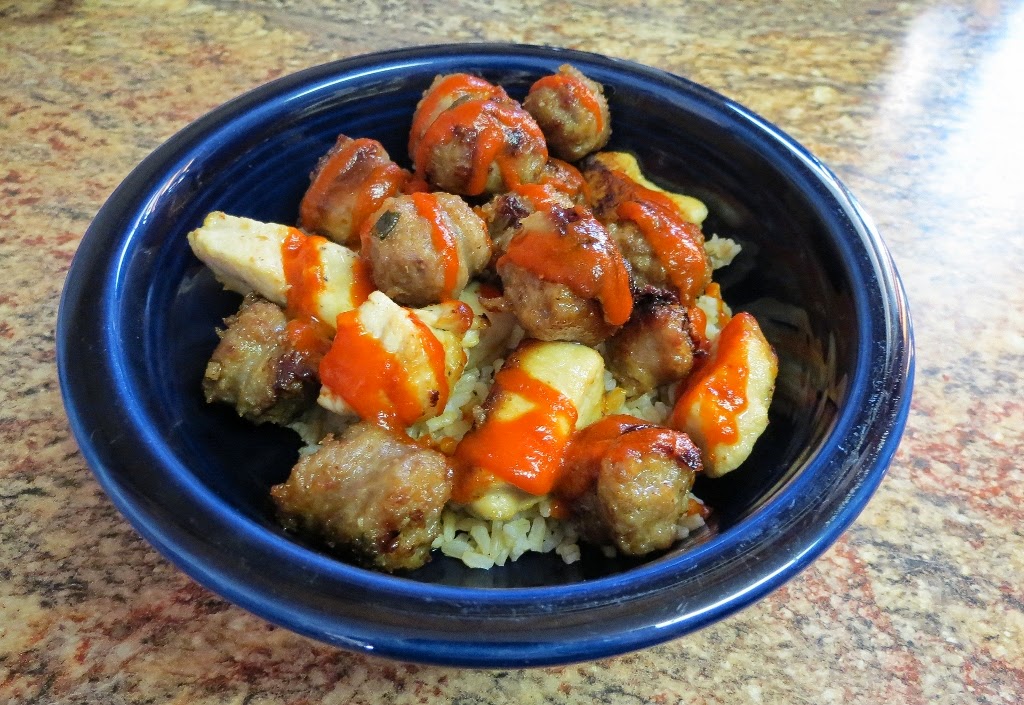 I am absolutely addicted to our local grocery store's pineapple brats. The jalapeno and cheddar brats, too, so I combined them with some prepackaged, frozen chicken to make a really great low-carb meal. If you get the preseasoned, frozen chicken that's already been spiced and marinated, this dish is even easier. Ingredients: 8 brats (I used half pineapple, half jalapeno cheddar) 1/2 a bag of preseasoned, frozen chicken, thawed 2 servings brown rice sriracha sauce to taste 1. Heat 2 Tbsp olive oil in a large cast iron skillet. Begin boiling water according to package. 2. Cut brats into bite-sized pieces. Add to oil and stir fry. 3. Prepare rice as directed. 4. Thaw chicken as directed on package. 5. Add chicken to brats and stir in to coat in the bits from the bottom of the skillet. 6. Serve with rice and top with sriracha as desired.
Post a Comment
Read more

10 Verses About the Love of God

A Weekend of Asking In Faith 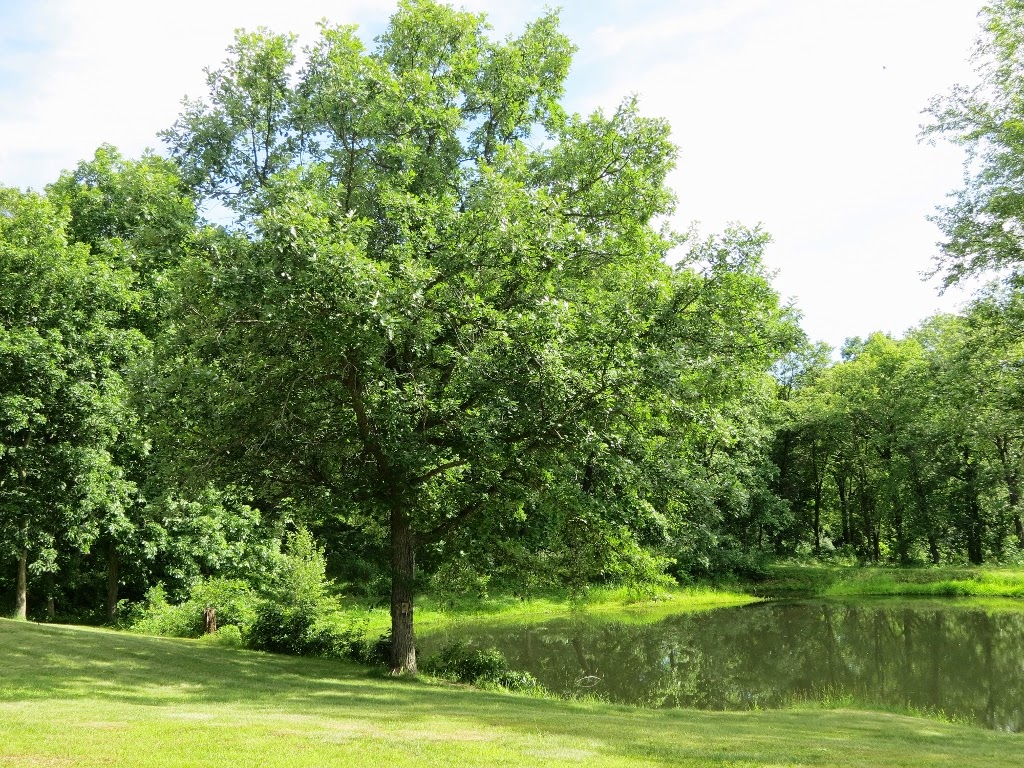 There are some amazingly beautiful and special places in the world God has created for us. There are special people, special events and special moments that He has put into life just for us to enjoy. But there is so much more available. We can't but limits on God or hinder the Spirit, or we miss out on the joy and love the Lord truly has set aside for us. The sky's the limit with the True and Living God. But let him ask in faith, nothing wavering. For he that wavereth is like a wave of the sea driven with the wind and tossed. James 1:6 Make this a weekend of asking in complete faith. Nothing wavering means not one ounce of your being has any doubt that you will be heard and answered. We serve a great and mighty God, Who is ready to do great and mighty things in our lives if we simply ask. What's on your heart this weekend? Can you ask, nothing wavering?
Post a Comment
Read more 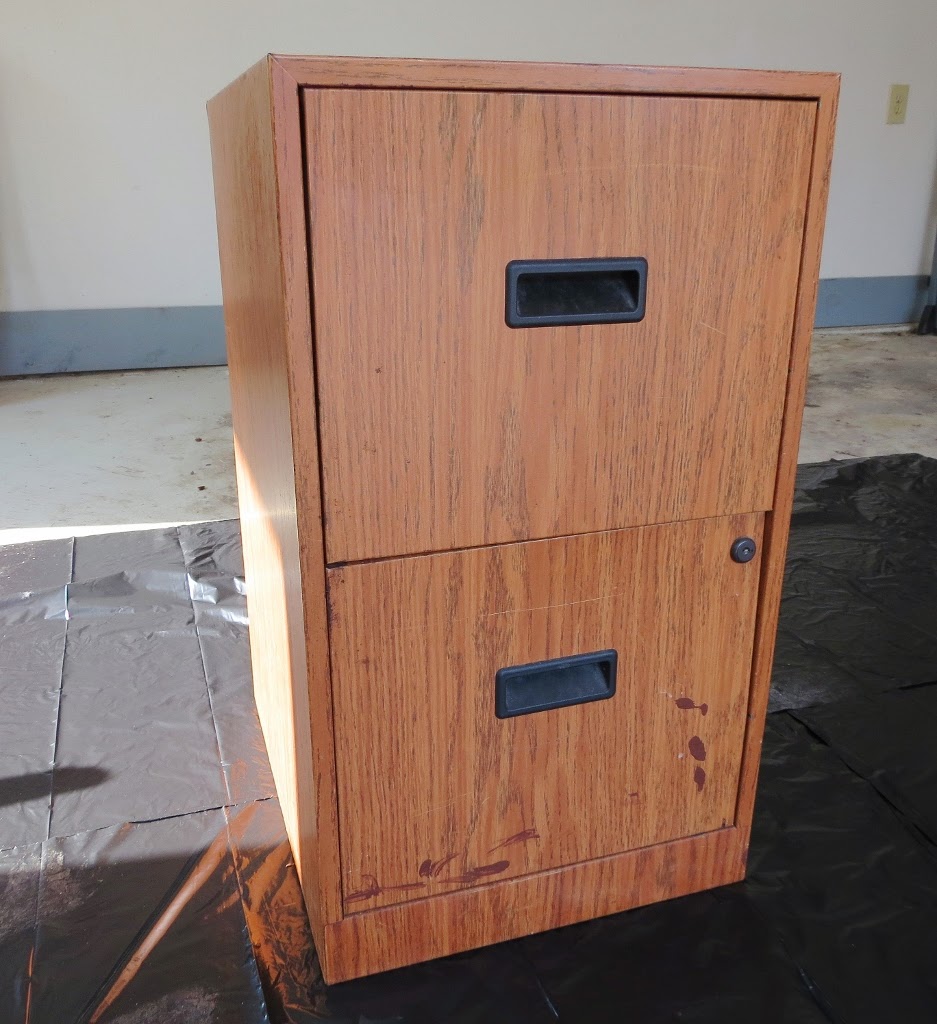 I'm on furlough this week, meaning I'm home from work without pay. That also means I have nine whole days to do with as I please. And I've been so busy catching up on things that need to be done around the house - and lots of things that I've really wanted to do but haven't had time or energy for. When I asked Danny if there was anything he'd like for me to do during my time off, he mentioned the office. Our filing cabinet's drawers only open halfway, so they're not very practical. That makes filing in general pretty miserable, so it's not being used. There - that's my confession for the day. So I went to the thrift shop and found this metal filing cabinet for $4.99.  Now, I will be the first to admit that it is terribly ugly. But it's the right size and has lots of potential.    It has tons of scratches and, for some reason, paint splotches all over it. And one of the drawers is bent - makes me wonder how. Hmmm
2 comments
Read more 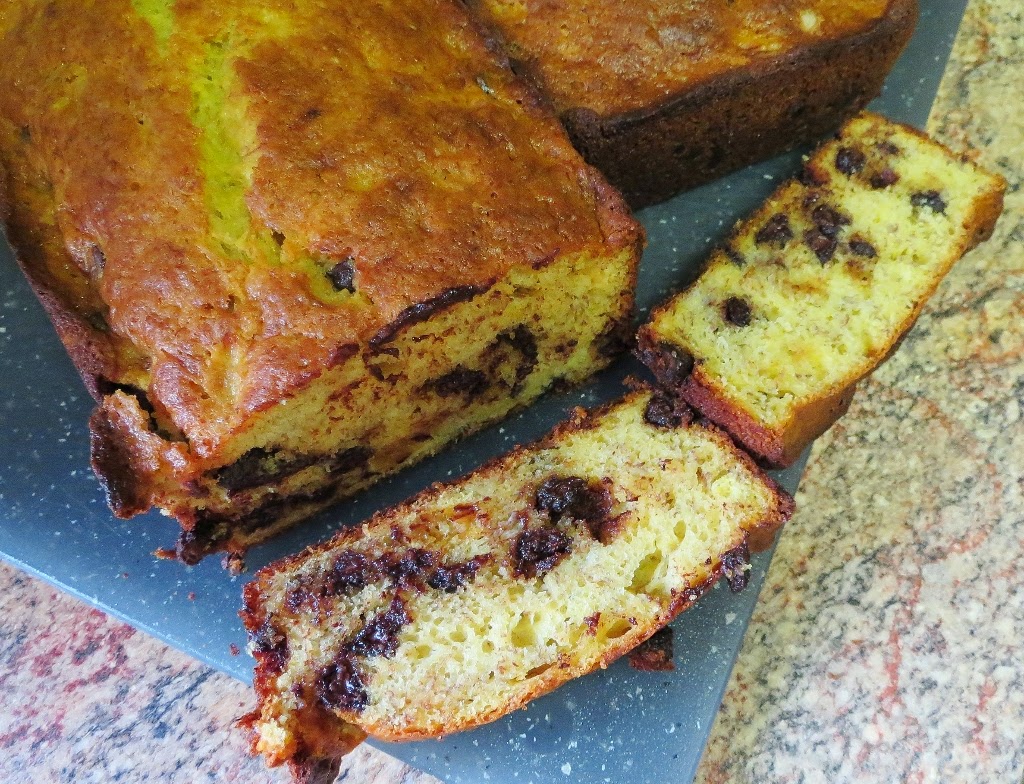 Ok, Danny shared his granddaddy's banana bread recipe a few weeks ago, so now it's my turn. Mainly because I had four overly ripe bananas on the counter, but also because it's fun and easy. And you probably have everything you need it in your pantry right now. My version needs just a cake mix, its extra ingredients and chocolate chips. It doesn't get much easier than that. Ingredients: 4 overly ripe bananas, mashed 1 box of cake mix (I used lemon and it was yummy!) 1/3 cup vegetable oil 3 eggs 1 bag mini chocolate chips 1. Preheat oven to 350 degrees. Spray two loaf pans with nonstick spray. 2. Combine all the ingredients in a large bowl. Pour into the two loaf pans. 3. Bake at 350 degrees for 45-50 minutes. Edges will be light brown. 4. Let cool completely and store in a sealed container.
Post a Comment
Read more 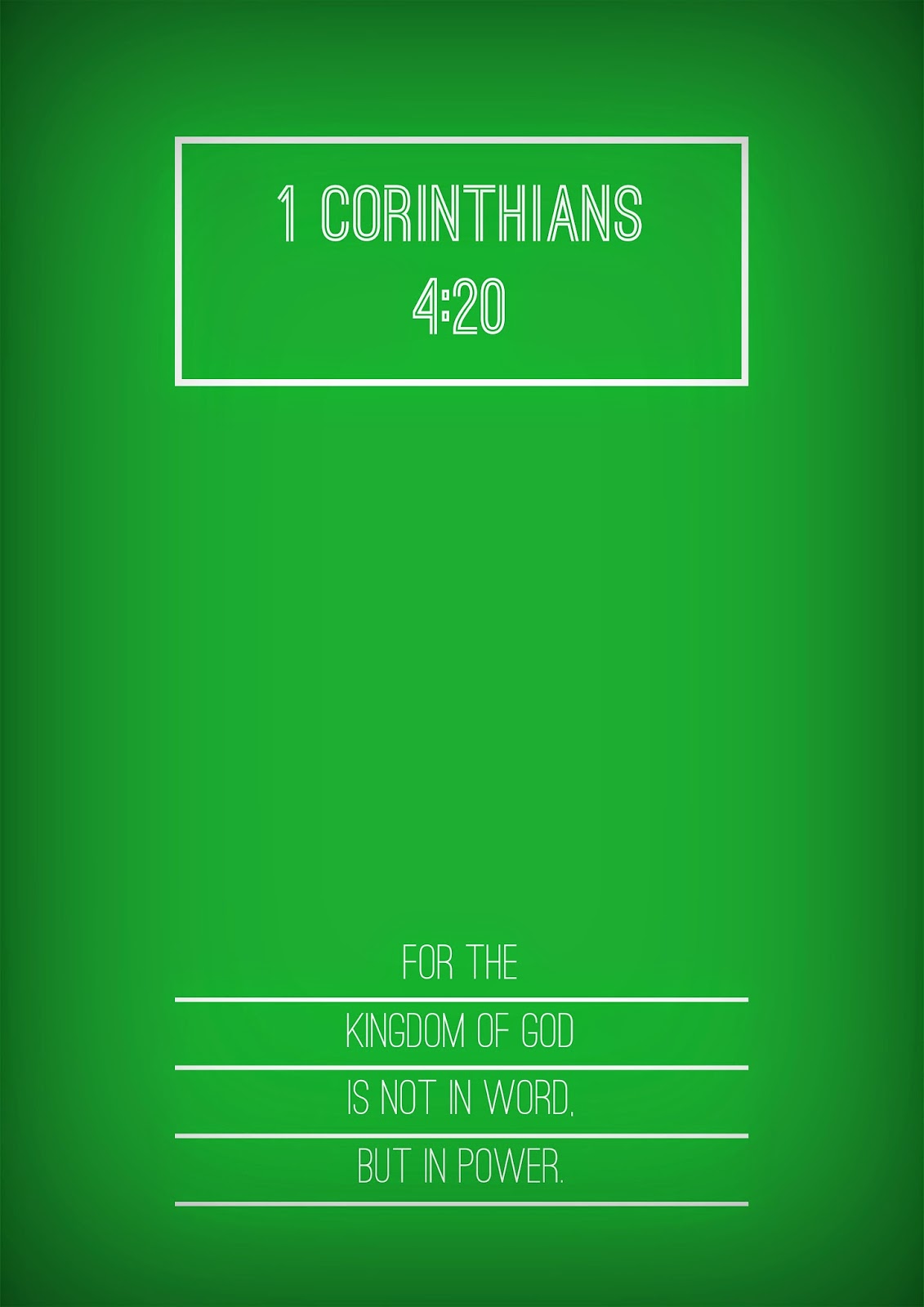 Instant Gift In A Glass 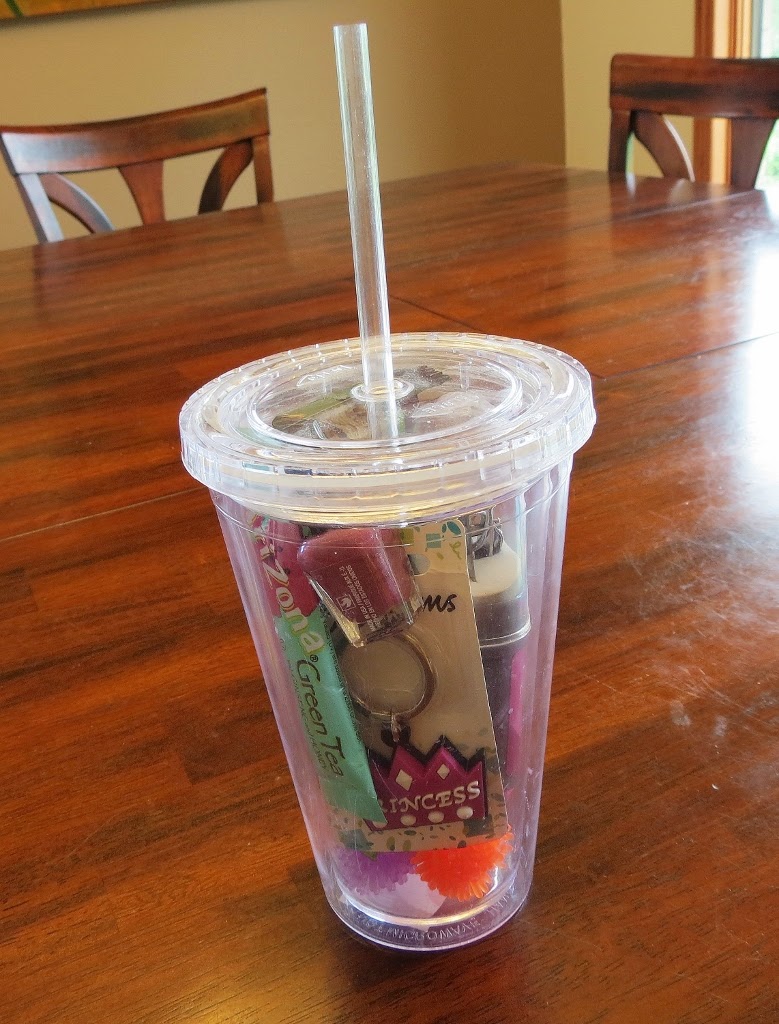 Summer is the perfect time to stock up on these plastic, lidded cups. I was able to find several different kinds at the dollar store and other places for $5 and under. Not only are they great for an iced coffee or afternoon lemonade, they can also serve double-duty as a very special gift. Fill them up with several small items, tie it up with a ribbon and you've got a memorable present in its own packaging. I'm thinking about these for gifts or door prizes at our ladies retreat this fall. Our theme is being a princess, a child of the King, so we're already starting to stock up. I found these precious key chains, and we're looking for pampering things like manicure sets and bath scrubbies. All of these can tuck into the glasses and be sealed up tight. Maybe you have a birthday or other summer event that you need a small gift for - with these glasses, you can tailor the bits inside to a specific person. Think about: * Father's Day * Weddings * Summer b
Post a Comment
Read more 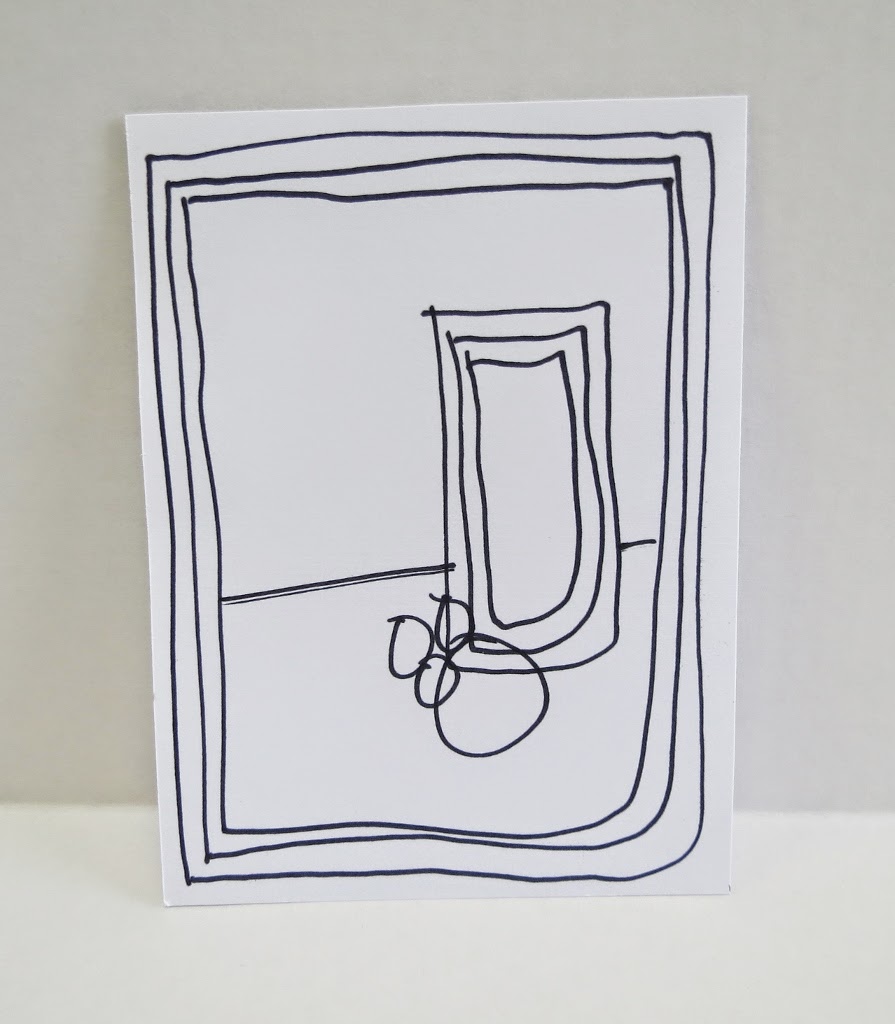 Layers and originality - what a fun sketch! (If there's ever been a question about my drawing ability, I think this sketch settles it. I had to laugh at it myself. Please understand that I'd rather cut and paste than draw any day.) With this sketch, you'll round one corner and keep that throughout every single layer of the card. That's my favorite part of this whole project. You'll also want to find a really great ribbon and some 3D embellishments to really make this card pop. Layers, layers and more layers are going to make this one a definite keepsake. And a really pretty patterned paper will make a great focal point on that righthand side of the card. For my card, I chose some lovely, coordinating blue patterns. That dragonfly paper jumped out at me first, and that blue ribbon was the only one even close to matching that I had in my collection. I used a 1 1/4" punch to make a mat behind the phrase sticker and then accented it with three self-ad
Post a Comment
Read more

A Weekend of Weeding 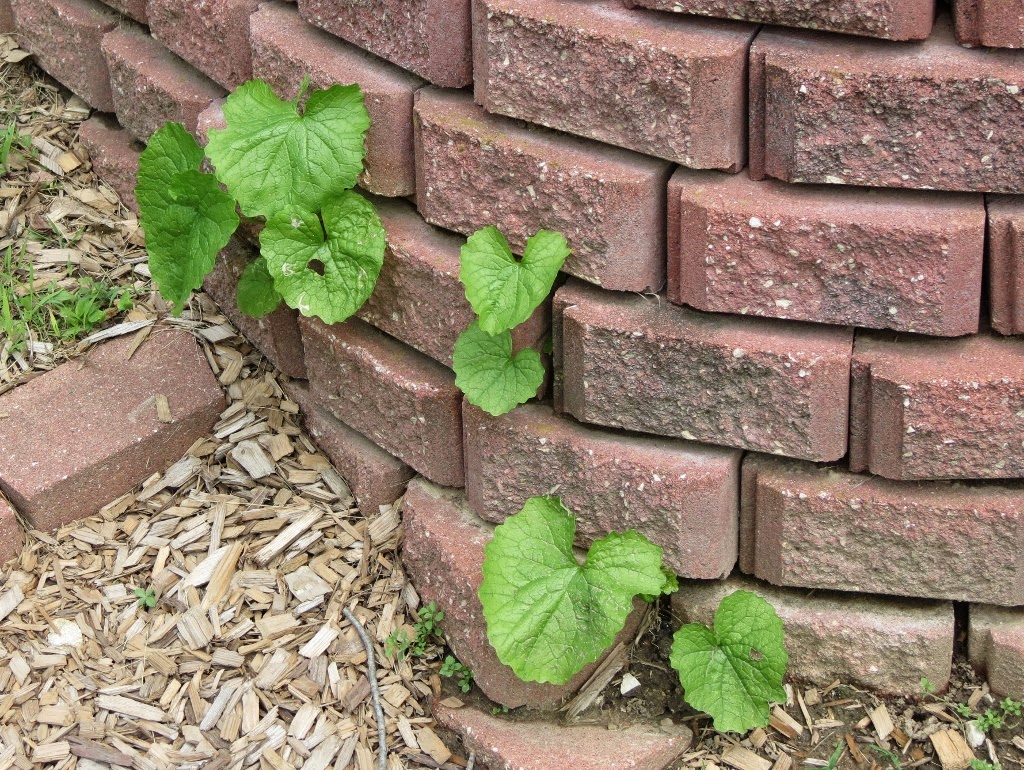 Last summer, we removed several bushes from our gardens. They were dying and had become a hiding place for creepy, crawly things that I don't even want to mention. So it was time for them to go. I have every intention of planting some new flowers and bushes in those spaces, but it just hasn't happened yet. And now there are little sprigs of weeds growing up in the crevices. They're not huge and everywhere, but they're very definitely getting ready to be a problem. And he spake many things unto them in parables, saying, Behold, a sower went forth to sow; And when he sowed, some seeds fell by the way side, and the fowls came and devoured them up: Some fell upon stony places, where they had not much earth: and forthwith they sprung up, because they had no deepness of earth: And when the sun was up, they were scorched; and because they had no root, they withered away. And some fell among thorns; and the thorns sprung up, and choked them: But other fell into good groun
Post a Comment
Read more

June 06, 2014
The pizza place focuses on pizza. The ice cream shop serves up ice cream. The car lot sells cars. They each have a central theme that keeps them in business and makes them successful. Businesses that don't have a focus usually don't last very long. If a shipping company suddenly decides they're also going to manufacture toothpaste, chances are they won't survive. They've put their stock in too many places and can't excel at what they originally wanted to do. I've read several places lately that it wasn't until last century that people started using "priorities" instead of "priority." The word originally meant that thing which had greatest importance. It was the person or thing that was most important. So, if using that definition, how can you have "priorities" in your life? Most important, using proper semantics, means one thing. One most important, not several. Let us hear the conclusion of the whole matter: Fear Go
Post a Comment
Read more

It's About Trusting God

June 02, 2014
There have been at least three separate occasions this week when I've been surprised by how good God can be. He's blessed beyond measure, He's gone above and beyond all I could ask or think and He's done it with absolutely perfecting timing. Why does this always surprise me? If we're trusting in the Lord to get us through, get us over, get us past and get us beyond, why are we so pleasantly surprised when He does what He said He would do? The God of my rock; in him will I trust: he is my shield, and the horn of my salvation, my high tower, and my refuge, my saviour; thou savest me from violence. 2 Samuel 22:3 We can't always see the road ahead, and that's OK. Surprises, when they come from the Lord, can be a wonderful thing. He's already planned our the path before us, and then He comes back around to take us through it. That is an amazing and beautiful gift from the God of grace and mercy. Trusting God means expecting Him to be there, expecti
Post a Comment
Read more
More posts