The Pillar Of Cloud To Lead, Guide And Direct 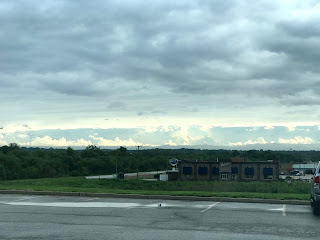 For the better part of two weeks, southern Iowa was covered with a thick cover of clouds. It rained, it stormed and it stayed dark and dreary for days on end. It was enough to drive anyone crazy, even someone like me who loves the rain. Enough really can be enough.

But even in the thick of the storm, when the clouds were doing crazy things and the lightning struck all around, there was still beauty. The sun still shined, and you could see it between the cracks. Every now and then there would be a little patch of blue sky in the middle of black clouds. The cloud banks were picture-worthy even when it was a little scary out there.

God’s presence never left the people of Israel as they wandered in the desert - no for one moment. In the darkness of night, it was a bright flame that they would never lose sight of. And in the day, it was a cloud, an obvious sign that they couldn’t miss. They had no road, no road signs, no flashing lights that pointed them in the way they were supposed to go. Instead, they had God’s own presence in that cloud, something beautiful in something darker than we would normally like.

In the days and weeks to come, there will be moments when the world is too dark and too scary, and we think there’s no hope in sight. But it’s in those moments that we need to turn our eyes upward and find the cloud, the pillar of God’s presence, showing us the way. He will never let the darkness overtake us, and He will never let us lose our way when we’re trying to follow Him. I pray that we will each throw our fear at His feet and follow His pillar of cloud in confidence, knowing He is there every step of the way.
Photos Scripture