The Lesser Light To Rule The Night 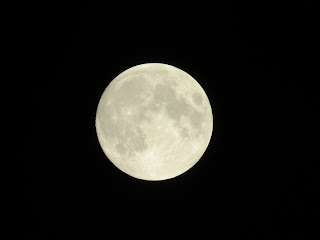 A couple of times a week, the puppies decide they want to go outside in the middle of the night. This week they timed it perfectly because it was the night of the full moon. I have an amazing camera - that apparently reaches all the way to the moon - so I grabbed it and stood out on the deck to get this shot.

You may already know this, but the moon doesn't make its own light. That's why it waxes and wanes throughout the month, as it reflects the light from the sun. Once every 27 days you'll see it fully lit like this, whether we really take notice of it or not.

Want to see how big the moon is compared to the earth? NASA suggests placing a green pea next to a nickel to see a fairly accurate comparison.

The moon is about 239,000 miles away from the earth, the planet's only natural satellite. 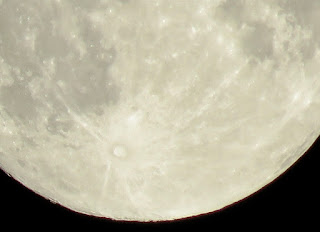 The only celestial body to have had humans standing on it, the moon has also had more than 100 robotic spacecraft on it as well.

For those of us watching our figures, we would weigh much less on the moon as it has much weaker gravity than we have on earth. Road trip, anyone?

The God who is capable of running the entire universe, creating suns and moons and hanging stars in the sky is also capable of running my life today. Even in these first days of creation, God knew my name. During the grandeur of those first rays of sunshine rolling across the newly formed sky, God was thinking about me. There aren't enough words in the English language to explain what this does to my heart.

I would encourage you this weekend to take a few minutes to look up at the night sky. Let's go stargazing and put things in perspective. While we may feel tiny and unimportant in the grand scheme of things, we can rest assured knowing that in a universe that needed the moon, God also thought it needed one of each of us. That's how much He loves us, and that's why He gives us the gift of Himself every day.

On The Property Photos Scripture