Our Alumni Pupdate To The Animal Shelter 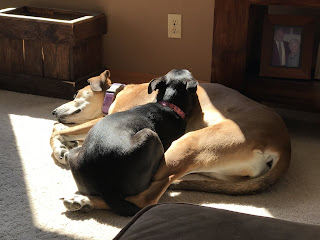 When we moved back to Ottumwa in 2011, we brought our two senior dogs with us. They were adopted from a shelter in Kentucky, and they were the most special dogs ever. They began to age, though, and in September 2014, we met our Great Dane Molly when Heartland had several dogs with them at the Alzheimer’s Walk at Indian Hills Community College. She became the perfect addition to our family. 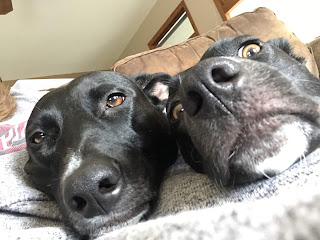 It wasn’t long before we said goodbye to both of our older dogs, who were 14 at the time, and Molly was our only dog for quite a while. But we wanted her to have a playmate, so we went to Heartland again to see a little black female dog that looked so much like the ones we’d lost. When we arrived at the shelter, though, we learned that she had a brother, they were a bonded pair and the last of their litter. So that day we went home with two black lab/German shepherd puppies to add to our pack. 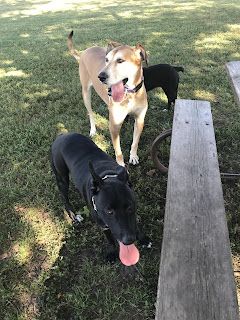 Almost two years later, we have three constant companions who love cuddles, running on our acreage and watching all the wildlife pass by the windows. They make us laugh, they frustrate us to no end some days and there’s no place they’d rather be than wherever we are. We couldn’t have asked for better matches than these three puppers.

Thank you so much for all you do for the animals and families of this area. For us personally, you have not only rescued three dogs, you have filled three dog-sized holes in our hearts.