A Weekend Of New Creatures 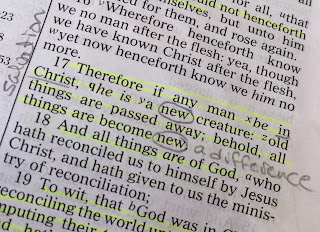 Scientists recently discovered six new sea creatures never before identified at the bottom of the Indian Ocean. While exploring a section of the ocean floor the size of a football field, the team found crabs, snails and worms unlike anything they had ever seen before. Almost two miles beneath the surface of the water, these new creatures will give scientists something to study and theorize about for years.

A new creature means something completely different in God's dictionary.

Therefore if any man be in Christ, he is a new creature: old things are passed away; behold, all things are become new. 2 Corinthians 5:17

For the scientists, the new sea creatures had always been there - they just hadn't been discovered yet. There was nothing miraculous or special about them, other than they were hidden in the deep dark of the ocean. They hadn't been created at just that moment for the experts to find. They were simply stumbled upon at the right moment.

For the believer, the new creature wasn't hiding inside of us waiting to be discovered at the moment of salvation. It wasn't buried under a rock or tucked behind a tree like the creepy crawly sea life. This only happens in nature, not in the life of a human being.

Scientists would never be able to find remnants of the old creature because they are passed away. It won't be a fossil dug up on an archeological dig. It won't be buried in a crypt or mausoleum. It no long exists, living or dead.

Make this a weekend of studying that new creature. Become a scientist yourself and learn all you can about the new creature you have become. It's through this research that you'll become familiar with the work God has done in your heart and soul.

And it won't be a worm or snail or other creeping creature you'll find. It will be a miraculous new creature touched by God Himself.
Photos Scripture