Ways To Save a Bored Dog 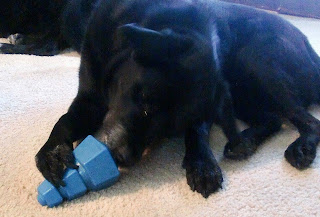 For about 9 months out of the year, I don't have a problem leaving the girls outside for a while. They have tons of backyard space with trees that give them plenty of sticks to play with. And now they have a kiddie pool to wade in/avoid, depending on which puppy you're talking about. Bailey would spend all day outside if we'd let her, as long as she had squirrels to chase and birds to watch.

But during those other three months, the weather in South Carolina takes over my schedule. I can only let them out for a few minutes at a time when it's over 100 degrees before the heat index. We go for our walks very early in the morning, and they can go out back briefly during the day.

So obviously, I have two very bored puppies. They're very clingy to begin with, but when there's nothing to do they get even worse. I love their devotion, but not when they're underfoot. While the looks on their bored little faces break my heart, that time of doing nothing can lead to destructive behavior in some puppies.

Our favorite boredom-buster is the peanut butter chewy. These heavy rubber treat toys have holes in the bottom for treats to be tucked into, and then the girls have to spin them and turn them over to get the food out. What makes it even more time consuming is when I cover them with peanut butter and let them have at it. Generally we stay in the kitchen, but they've been known to wander. But then I have the cleanest floor in town because they have to get every bit of that peanut butter up.

Another great game to play is Hide and Seek. I place small treats all over the house and then release the hounds! Bailey finds the most because she actually uses her nose to find them. Sadie, my super-smart dog, hasn't quite grasped that concept. You can put them over, under, in and around everything - just make sure you know how many you put out or you'll be finding them for days. 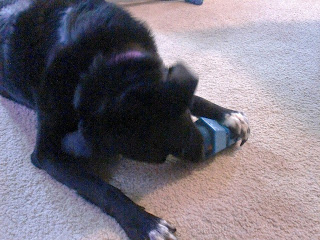 Other ways to beat puppy boredom:
* Exercise them as much as you can in the morning, while it's cool. If they're all tired out, they'll nap during the hottest part of the day.

* While I'm working in my craft room, I'll roll a ball out the door every few minutes and let Sadie play a little fetch. She'll bring it back and leave it at my feet on the "drop" command. Then she's ready to go again.

* Work on obedience training. The best cure for boredom is something that stimulates the brain as well as the body. Practice old commands that may not be enforced all the time and learn some fabulous new ones.
Pets

While it might be tempting to skim over three chapters of names and places, these passages are also filled with little nuggets about life and people and situations we could otherwise miss. God knows each and every one of these families, their homes and their genealogies intimately, just as He knows us and our lives. What details of these lives did you notice today that had never jumped out at you before?