Help Your Dogs Be Cool 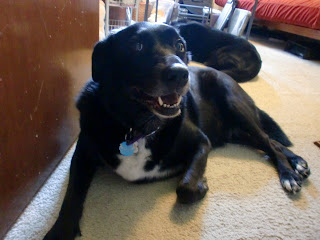 Our thermometer said 100 degrees several times this week. The air conditioner has been having a hard time keeping up, especially with dogs laying in front of the air vents. It's been hard enough for the humans of the house to keep cool, so it's twice as hard for your pets.

It's time to make some effort to keep our dogs just as cool and comfortable as we are. They'll thank you for it...trust me!

* Fight dehydration. Water is just as important to our four-legged family members as it is to the two-legged ones. Make sure their bowls are always full of fresh water, and place them in convenient places. If they're outdoor dogs, change the water often since you have no idea what might have gotten in there.

* Time your exercise. Plan on going for a walk first thing in the morning or as late in the day as possible. This important for two reasons: first to be out during the coolest times of day, and second to keep puppy feet off the hot asphalt. Imagine if you had to walk around barefoot on hot coals...

* Bring 'em in! One of my biggest pet peeves (pun completely intended) is leaving pets outside during the heat of the day. I understand there are certain situations where they need to be out, but I can't stand seeing animals miserable in the steam of summer. If it's possible to have them inside, please do so! It can prevent health problems as well as give you some extra bonding time.

* No parking. Never, ever, ever leave dogs in a parked car for any length of time. I had Cay at the vet the other day, and contemplated stopping to do a quick errand. It would have taken three minutes, but I decided that would be dangerous to her. It was approaching 100 degrees in the car that day, and if anything had happened in the store to delay me, it could have been disastrous. Instead I ran her home quickly and then went back out. It might have been a few minutes out of the way, but I love her enough to make a sacrifice.

* Have a pool party. Get a kiddie pool and fill it with cool water. Then let them have at it! This a great way for your dogs to cool off and get some energy out. Never, ever leave dogs unattended around a pool, even if it's shallow. Some dogs aren't great swimmers, and you never know what might happen.

* Give a good grooming. All dogs have different grooming needs, but it's even more important when the temperature sky-rockets. If you can, have her fur trimmed and combed out. Don't get it all cut off, though, or you'll be treating for sunburn, too. For other dogs, a great combing will get out that second layer of hair that keeps in so much heat. They'll feel much more comfortable with their summer hair-do's.
Pets

While it might be tempting to skim over three chapters of names and places, these passages are also filled with little nuggets about life and people and situations we could otherwise miss. God knows each and every one of these families, their homes and their genealogies intimately, just as He knows us and our lives. What details of these lives did you notice today that had never jumped out at you before?