Coming Back In A Cloud 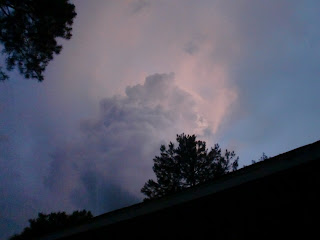 South Carolina has been knocked around by thunderstorms over the past few days. For someone who loves storms (like me!), it's been a fantastic week.

The beautiful part of sky-watching during the storms has been the cloud formations. This one came over our house after church Sunday night. We had been hearing thunder all through our revival meeting, and there was even a rainbow over the fellowship building after the service.

When I see clouds like these, I always think about the rapture of the church. We read in the book of Acts how Jesus Christ returned to Heaven in the clouds.

And when he had spoken these things, while they beheld, he was taken up; and a cloud received him out of their sight. Acts 1:9

Picture men standing there, gazing up at the sky and looking into the clouds. I've always wondered if it was just one cloud in a bright blue sky, or if it was a sky full of dark clouds. This is the most precious part of the life of Christ, and He could have used any kind of cloud He wanted. Then came the angels describing His return.

And while they looked stedfastly toward heaven as he went up, behold, two men stood by them in white apparel; Which also said, Ye men of Galilee, why stand ye gazing up into heaven? this same Jesus, which is taken up from you into heaven, shall so come in like manner as ye have seen him go into heaven. Acts 1:10-11

Can you imagine watching the Lord ascend into Heaven on a cloud and being told He will return the same way? For this very reason cloud formations like the one Sunday night get my heart racing. Could this be the cloud? Could Christ Himself be on one like that? Will He use the big, fluffy, white type or the angry dark ones? The excitement builds when we think about getting to share that glorious ride.

For the Lord himself shall descend from heaven with a shout, with the voice of the archangel, and with the trump of God: and the dead in Christ shall rise first: Then we which are alive and remain shall be caught up together with them in the clouds, to meet the Lord in the air: and so shall we ever be with the Lord. 1 Thessalonians 4:16-17

Though we don't know the day or the hour, we can enjoy the anticipation of being caught up in the clouds. When Christ returns we will get to meet Him in the air, perhaps on one of those clouds in the sky right now. Until that time arrives we won't know for sure, but it's such a joy to think about sharing a cloud with the Lord.

So, is it a cloudy day where you are? Today might be the day.
Scripture

Do you know what drives your enemies crazier than anything else in the world? Kindness. Helping and loving and blessing those who would never return the favor turn into heaps of coal upon their heads, and they’ll have no idea what to do with it!! What can you do in your interactions with people who aren’t friendly that will honor God and frustrate those trying to provoke you?