While The Humans Are Gone, The Pets Will Play 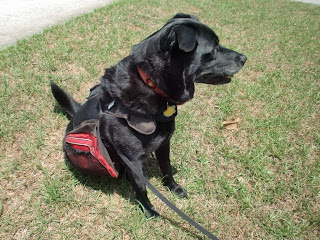 We're getting ready to go on vacation soon, and we've already talked to the girls about it. I know they understand some things like packing suitcases and loading the car, and I think every time Bailey puts her backpack on she thinks we're all leaving.

Unfortunately they're staying here while we're gone - two black labs and a calico cat on a plane for a five-day vacation doesn't make a whole lot of sense. (Not to mention the trauma to the poor baggage handler who would have to remove them from under the plane...not a pretty picture.

So we're getting a house-sitter instead. We have a friend whose wife is going to Mexico for the exact same days that we'll be in Colorado...thank you Lord! He has agreed to live here with the girls for that long weekend so we don't have to worry about boarding them. I'm always concerned about how much outdoor time they get and whether they're eating right, so having someone we know living here takes a load off our minds.

We're leaving a notebook full of info for the sitter just to cover all the bases. It includes: all of our contact information along the way, especially phone numbers and locations; feeding schedules and amounts; vet info and contact number; locations of things around the house like treats, food, toys and emergency items like circuit breakers and first aid kit.

It's also super important that we've filled up their food containers before we leave. Can you imagine walking into the pet store with a piece of kibble - Excuse me...do you know what kind of food this is so I can buy more? I don't want him to have to buy anything extra for the girls unless he wants to. There are tons of treats in their jars and toys piled in the basket.

Our flight itinerary is laid out for the sitter as well as when to expect us home. (Unfortunately it will be in the wee hours of the morning - let's get the whole house stirred up, right?) We don't want to accidentally cross paths and the girls are alone for too long. They've got great bladders but I don't want to push it.

As for the girls, we're loving on them and explaining the trip as best we can. I know they only understand tone of voice, but sometimes when Sadie looks at me while I'm laying out the itinerary, she almost looks like she is following along. They're getting some extra walk time and playtime in the back yard, so it would be nice if they'd just sleep for the whole weekend!

As great a weekend as it is going to be, we want to make sure that everything is prepared here at home. I would even guess that they'll be having as much fun as we are!
Pets

My sweet and loving husband gave me my birthday present three weeks early. I had asked Danny for a bench that I could put down by the big pond. I wanted a place where I could go, pray and relax away from the struggles of the day. He blessed my heart in so many ways by creating this bench out of landscaping timbers with his own two hands. His talents amaze me all the time. But what meant even more was that he was willing to brave 110 degree temperatures to finish this just for me. That speaks volumes about the loving heart of this wonderful man. Thank you, Sweetie! I'm so excited to get it down by the water and spend some time with the Lord. The first thing I want to do is thank Him from the bottom of my heart for the husband He gave me. I'm blessed beyond measure.
Read more

God was completely up front with Moses and Aaron, that He would harden Pharoah’s heart and refuse to let the people of Israel leave Egypt. While this seems counterproductive to the Lord’s plan for His people, His plan made sure that both the Israelites and the Egyptians would know that He - the Almighty God - had saved the people, not Moses and Aaron. Are there times when we take credit for things that happen in our lives, instead of giving all the glory and honor to God?