That Noise On The Roof

May 08, 2010
Since the weather has been so warm and pretty lately, the girls and I have been spending on a lot more time outside. Danny made the neatest gate for the front porch so we can all sit out there together without chasing dogs around the neighborhood.

Sometimes when I'm cleaning I'll send the girls out to the front porch so I can actually get something accomplished. (Though I do get extra exercise dancing around dogs lying on the floor.) So this week I sent them out like normal and let them wander around on the front porch for a few minutes.

I had only been inside for a minute when I heard Bailey growling and Sadie barking like crazy. I automatically assumed that there was another dog walking past or the mailman had driven up. So I went out to lay down the law about being obnoxious. 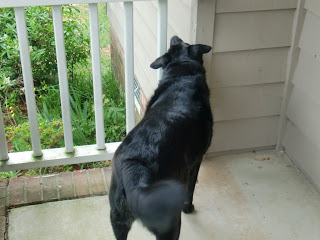 But when I got out there I saw Bailey just standing there like this. Sadie was dancing around the front door trying to get my attention while her big sister was fixated and making terrifying noises.

So I looked up, following her gaze, and this is what I saw. 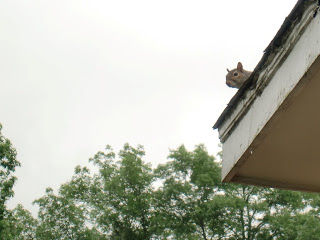 This funny little squirrel was sitting at the edge of the roof line laughing hysterically at my girls. He was well out of their reach and he knew it. But that wasn't going to stop Bailey from showing her disapproval with body language and vocalizations.

Bailey has a toy squirrel of her own, Mr. Squirrel, who gets carried all over the house. Sometimes she'll even chew on him like she's cleaning his fur, which I'm sure he appreciates. I have a feeling that's why real live moving squirrels drive her crazy because she can't get at them. 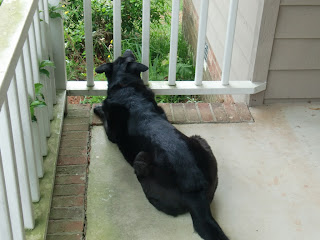 So after a couple of minutes Sadie was tired and ready to go inside, but Bailey was content to lay down by the railing and watch the squirrel's every breath. Eventually he jumped off the roof and headed for another tree. She never took her eyes off him for a moment.

It may seem like a small thing to some people, but for my girls this was the best morning ever...for today. We'll see what tomorrow brings.

October 16
Today’s reading: Zechariah 5-8
I love how God often shows His people the good things that are coming, then reminds them that they will come to pass of they obey Him. Obedience is always tied to blessings, rewards, crowns, prosperity and peace. How has God shown you the blessings that obedience to Him and His word bring?