Teaching Kids About The Power Of Their Words

If you’ve ever listened to a group of children speak to each other, you probably heard a variety of words. Loud words, soft words, happy words, angry words, words in song and words they weren’t even sure the definition of.

Our Sunday School lesson this week focused on the words we speak and the power they hold. The words we use as adults had to come from somewhere as children, and we wanted them to know exactly what the Bible says about how we are to speak to each other.

We started with five “good” words and five “bad” words. I wrote them on small pieces of paper and included one of the verses that contain that word. On ten pieces of paper, I wrote out the verses on the word cards so they could read them aloud.

Then their mission, and they chose to accept it, was to work as a group and match the good word with its opposite bad word. They each chose one of those words and matched it with its Scripture. When they found the student with their opposite word, they read the words and the Scripture. 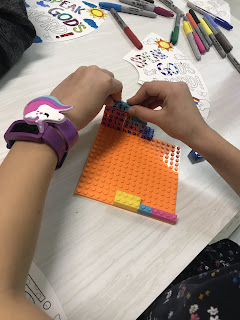 In the second half of the lesson, they worked with a partner to recreate all those good words with building blocks. I found packages of tiny blocks at the dollar store and wrote as many letters on each block as there were sections of block.

Danny suggested I make it even harder and not put complete words on any of the blocks. That way they would have to know the entire word and realize that four-piece block was actually the middle of a seven-letter word. So clever and so sneaky!

Our class was amazing. They knew the words almost immediately, they worked together in their pairs and even helped other groups who fell behind a little. At the end of class, they had a few minutes to color card stock megaphones, and we talked about how God’s words - the good words - are the ones we should be shouting out loud.

What are some of the good words and bad words from the Bible that have influenced the way you speak?
Scripture Sunday School