A Weekend Of Showing Mercy 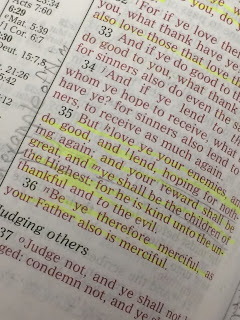 Jesus Christ spoke often of mercy, especially in teachings about the law of love and showing kindness to your enemies. He was an expert on the subject, as He faced a constant barrage of hate, anger, torture and eventually death.

But His instruction was always the same: be kind, show love and hope for nothing in return.

Be ye therefore merciful, as your father also is merciful. Luke 6:36

Using His own heavenly Father as the example, Christ told His disciples and the great multitude of people they were to show mercy as God had shown them mercy on so many occasions. Even those who had rejected God, rebelled against Him and turned their back on Him would be shown gentleness, kindness and compassion simply because it is part of His nature.

Make this a weekend of showing mercy. Think of how closely we will share His goodness when we are compassionate to someone who doesn't necessarily deserve it because He was compassionate when we didn't deserve it. Even those who have hurt us deeply can be shown mercy because God has been so very good to us.
Photos Scripture