A Weekend Of Getting The Weeding Done 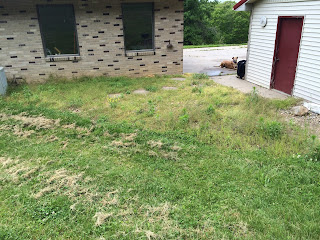 This picture comes from the result of a whole year without weeding. It's not a pretty picture, but an accurate one nonetheless. You see a combination of dandelions, creeping Charlie and some other unidentifiable green stuff.

I have a brown thumb, can you tell?

Not to mention that all sorts of spiders and other bugs had made their homes under all that overgrown mess. I sent Danny a picture of one of them because it was the largest spider I had ever seen on the property. You don't realize how many different types of insects there are in the world until you stir them all up in your backyard. 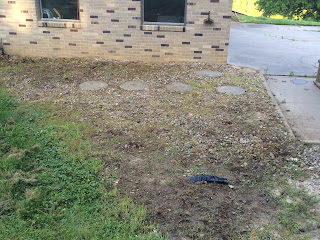 In contrast, this is the rock garden that was hidden underneath all that growth. I knew it was there, but it took several hours of work to find it. There's still more to be done, but finding the rocks inch by inch was (and is) motivation to keep going.

He also that received seed among the thorns is he that heareth the word: and the care of this world, and the deceitfulness of riches, choke the word, and he becometh unfruitful. Matthew 13:22

Make this a weekend of getting the weeding done — not in your garden, necessarily, but in your heart. Have you let the cares of the world grow up inside? Are you so overgrown with weeds of other priorities that God's word isn't getting a chance to flourish?

If so, it's time to get on your knees and do some weeding. You might be surprised at all the loveliness you'll find underneath the junk.
Photos Scripture