Who Doesn't Love A Good Mystery? 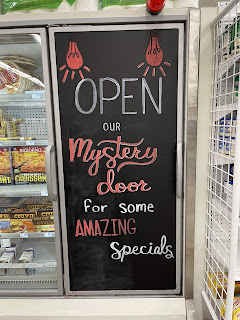 Everyone loves a good mystery. Whether it's a book or a movie or something on television, we're drawn in by the unknown. We enjoy following the clues,  solving the puzzles and celebrating when we figure out the answer.
With that in mind, you can't tell me you don't want to open this door. I have no idea what's back there. It reminds me of Let's Make a Deal - you can keep what you have in your hand, or you can choose the mystery that's behind Door #1. It could be something amazing, or it could be the giant rocking horse. You won't know until you try.
Several of the men who were inspired to write the Bible were also fond of mysteries. Mark, Paul (in many of his letters) and John all wrote about mysteries. They described the rapture, the kingdom of God, salvation, God's will, Jesus' parables and the relationship between Christ and the church as mysteries that needed answers.
Who now rejoice in my sufferings for you, and fill up that which is behind of the afflictions of Christ in my flesh for his body's sake, which is the church: Whereof I am made a minister, according to the dispensation of God which is given to me for you, to fulfil the word of God; Even the mystery which hath been hid from ages and generations, but now is made manifest to his saints: To whom God would make known what is the riches of the glory of this mystery among the Gentiles; which is Christ in you, the hope of glory. Colossians 24-27
Let's sit here with Paul for a moment and skip to the good part. The gospel of Jesus Christ was the mystery, hidden from the Old Testament believers and revealed in shadowy explanations until Christ came to earth. The Old Testament saints believed with their whole hearts that the Messiah was coming, but they knew little else beyond that, even with the testimonies of the prophets. They knew He was promised, but they couldn't even imagine what His arrival - and His effect on the world - would truly look like.
So, for us, the mystery has been revealed. We know the who, what, when, where, why and how of Jesus' life, death, burial and resurrection. We don't have a mystery door standing between us and the details of the gospel. How interesting to realize that we know more about Jesus Christ than the saints of the Old Testament did. They looked forward to it, but we're living it!
If we look around us, though, many of the people we see every day are still living in mystery. They either don't know or don't understand what the gospel means, how it applies to the 21st century and how it is still changing lives today. Guess what? That means we get to skip to the end of the story and reveal the mystery to them. Our testimony and the way we live our lives will show them all the clues they need to unravel the mystery of the gospel for themselves. That's how we tear down the door standing between them and a relationship with Jesus Christ. There's no better ending to a mystery than that!
Scripture