Building An Altar Of Peace 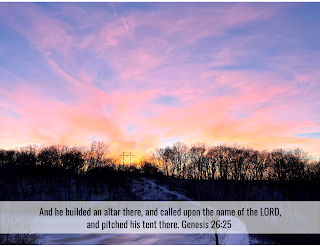 The story of Isaac and Rebekah and King Abimelech of the Philistines may sound like a repeat of Abraham and Abimelech in Genesis 20. Each time, the king is told the wife is actually the sister, strange things happen and the king learns the truth. Maybe after realizing it was those two generations of men, Abimelech started to wonder what was wrong with this family!
In the case of Isaac, the king allowed him to stay in the land, and God blessed Isaac a hundredfold, even with the lie and the cover-up. His holdings and his herds were so huge that he had an enormous entourage of servants and farm hands to take care of everything. Talk about owning the cattle on a thousand hills!
Remember, though, that Isaac was in a foreign land, and the natives were watching him. Genesis 26:14 says that the Philistines watched him grow to "very great" status, and they envied him and everything he had. They even went so far as to sabotage Isaac's family wells, filling them with dirt so they were unusable.
The king's response was to tell Isaac to leave. He was tired of ruling a grumpy nation, so the easiest fix was to have Isaac and his holdings vacate the premises. He was ready for some peace and quiet.
But so was Isaac. He left peaceably and immediately, setting his sights on the valley of Gerar. His tents were pitched, and he was ready to start a new dwelling place here. His servants even dug a new well that was directly over a spring of fresh water. Talk about the perfect location.
Then what happened? The natives of Gerar came looking for a fight. They claimed that the well was theirs, and they were in complete opposition to Isaac's servants and their apparent digging skills. Suddenly they were back in the same situation they were with the Philistines - there was striving and controversy, and Isaac didn't want anything to do with another conflict.
His response was to have his servants dig another well, but the Gerars wanted that one, too. So Isaac quietly moved on and dug another well. Finally there was no more argument about land rights. There was no more struggling just to find a place to call home. Isaac named the well Rehoboth, which means Room. He announced to everyone within earshot that the Lord had made "room" for them, and that this was where they would find peace and prosperity.
Peace. That was all Isaac ever really wanted. He had moved his family and belongings repeatedly just to squash the conflicts and have a place to rest. He was trying to preserve the quiet and give that peace to his people. Isaac was more interested in peace than anything else in his life.
So that night, God appeared to Isaac and gave him the first blessing for peacekeepers. He gave Isaac assurance that he had done the right thing, that He was pleased and that there were so many blessings in store for him and the generations to come.
And what was the first thing Isaac did when he finished listening to the Lord's words of love and grace? He built an altar. He made a special place in the name of his God where he could thank Him and praise Him and offer sacrifices of gratitude. The peace wouldn't have been possible without the Lord, and Isaac took full advantage of this moment and this opportunity to build an altar of peace.
Was this the end of Isaac's struggles? No, absolutely not. There would be many trials to come in his life, but he continued to be a man who strove for peace. Most notably, he would send Jacob away to work for his brother-in-law Laban, just so his sons wouldn't be in constant conflict. Or possibly dead.
At the deepest part of Isaac's heart was the longing for peace that only God can give. Many of us are in circumstances right now that cause everything but peace - heartaches, illnesses, family discord, misunderstandings and so much more. While Isaac's peace came from the way situations were moved and manipulated to reduce friction, we can have peace despite our surroundings, thanks to the Holy Spirit living inside us.
The best part, though, is that we can build an altar of peace just like Isaac did. We can praise the Lord, thank Him for the gift of His peace and sacrifice self on the altar every single day. Peace comes from our great and wonderful God, who knows what we need when we need it. How beautiful the response can be when we build Him an altar of peace in our hearts.
Scripture