When Life Throws A Disaster At Your LEGO Island, Figure Out How To Fix It! 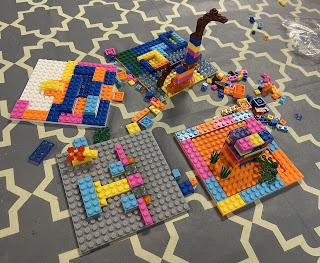 We’ve been covering also many deep spiritual topics in our youth group as we read through the book of John verse by verse. And for kids in 8th-10th grade, who are either new Christians or don’t have a relationship with Jesus yet, it can be pretty daunting. So we regularly plan an activity that isn’t necessarily spiritual to begin with, but still has a message in it.
One of my favorites is pulling out the LEGOs from the dollar store and piling them up in the middle of the table. They love that surprise when they walk through the door.
One week it was about building bridges, and they had to work together to connect their two creations. Another time it was about designing houses and comparing it to how God designs our earthly and heavenly homes. However we plan to circle back to the Lord with the lesson, it’s fun to see their imaginations run wild for a little while.
This week we gave them each a base and told them it was their own personal island. They had seven minutes to build and decorate their island any way they wanted. What I learned immediately is that we don’t have enough blocks … dollar store run this weekend!
But what surprised me was how many of them hesitated before they started building. “But what do I build?” “I don’t understand.” “For seven whole minutes?” They didn’t seem to understand that they were free to do whatever they wanted - no right or wrong or grade at the end. So we very quickly broke down that wall and threw some bricks at them. Just have fun!
When the seven minutes were up, we had each person describe their island. Some of them had complex back stories about families and airplanes and not painting all of the grass orange because that just seems excessive. It was interesting that some of them didn’t know why they built what they did - they just built and this is what happened.
So then… dum, dum, dum … the twist! Danny told them that a disaster had befallen their perfect little island. He went around the table and explained the situation: one of the islands was sinking and the builder had to create something to keep it from going under. Another was in a zombie apocalypse and they had to save themselves. And then there was the one who was tired of walking so he had to create some type of transportation to get around the island. It was pretty much a free-for-all at that point.
In the end, we wanted them to have fun but also understand that disasters are going to happen in your life. The twist will come out of nowhere and probably blind side you. But in the end, God protects us from the disaster and shows us how to rebuild stronger than before. All that from a little LEGO island. Pretty cool.
Youth Group