A Vet Visit Leads To A Really Great Nap 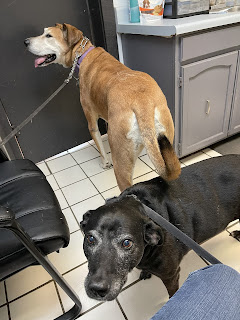 Two puppies got to go to the vet this week. Molly and Parker have both had joint problems for quite some time, but the licking and limping have been getting worse recently. They’ve been on joint supplements and doggie aspirin for the better part of a year, so we were afraid it’s time to go to something stronger. 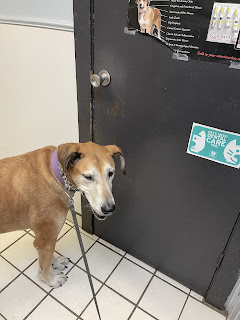 Big dogs especially are prone to joint problems, mostly because of the weight they carry around. Molly was diagnosed with arthritis the last time we went to the vet, and now Parker has been, too. Interestingly enough, just like with people, aspirin over a long period of time can cause liver and kidney problems, so we’re weaning them off that so we can move on to an anti-inflammatory/pain medicine. The other option is shots, but we’re not ready to go that route yet. 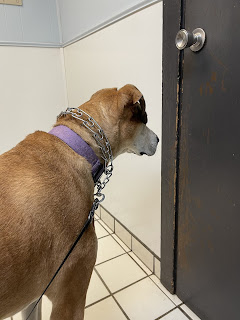 This is Molly listening to sounds in the lobby. While we were waiting to check out, a couple brought in two Huskies, and those dogs weren’t happy about anything! They barked, growled, whined, snapped, pulled and charged from the moment they walked in the door. They had to go wait outside and then be snuck in to an exam room - and Molly listened intently to it all. I’m not sure what she would have done if we had been out there already, so I was content to stay right where we were. 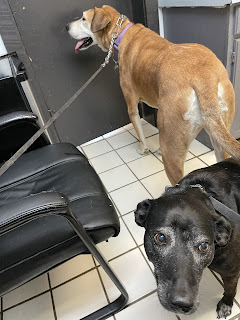 The door on the other side, though, was a different story. It led to the lab and office space, so she could hear voices and noises that she would much rather investigate. The two of them took turns opening the swinging door with their heads, then backing up a couple of steps when they were told no. All they wanted to do was go play with the vet techs, but their mean mama wouldn’t let them. And as always, they refused treats when their appointment was over. They don’t mind being there, but they were beyond ready to leave. So with a final goodbye to the girls at the front desk, we were back in the car and on our way home, where they napped liked they’d been chasing squirrels all day.
Pets