Proof That Drawing Is Not My Preferred Form Of Art 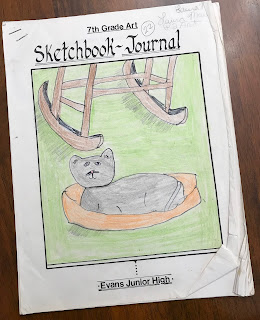 The year was 1989 and I was in the seventh grade. Our art project for the semester was to follow the instructions in a sketchbook and have it completed before semester break. It was then that I understood I was not a draw-er, sketch-er or anything else that required drawing on a piece of paper. I’m able to look back and laugh a little now, even though I was about as frustrated with it as the cat on my cover appears to be. And yes, those are whiskers, not a finely groomed mustache. 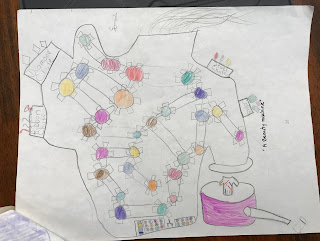 The purpose (supposedly) of this assignment was to use a little engineering and create a “beauty machine.” Somehow I designed a series of gears that would pull pretty things like ribbons and diamonds into the machine and turn them into designer clothing. It even has a smokestack and color-coordinating buttons on the control panel, which are both incredibly important when designing a beauty machine. Apparently. 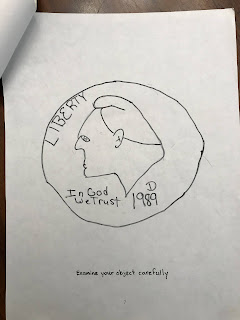 Poor President Roosevelt. If you pull out a dime and look at the detail, I doubt it looks like an ancient philosopher. I have next to no depth perception, especially on paper, so pretty much everything is out of proportion. Except the “In God We Trust.” That is perfectly perfect. 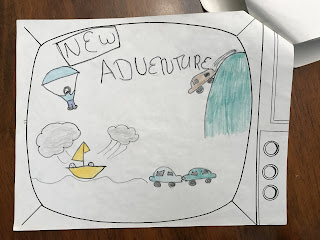 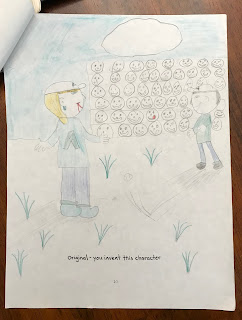 I vividly remember drawing this picture. I started with the two baseball players (apparently part of the Angels franchise) and then added a few shadows and some random sprigs of grass. The best part, though, are those spectators on the bleachers - the disembodied heads that decided to congregate at this ballgame. Please note that one guy at the bottom is still hungry and will probably end up at the concession stand soon. 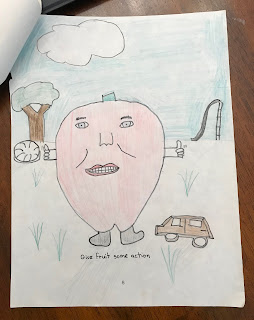 This is my take on fruit in “action.” The apple’s hands are moving in a little thumbs-up motion, so surely that counts as action. I love that he has very realistic eyes and mouth, despite having a line drawing for a nose and the craziest cheekbones ever. His little car is adorable, if I do say so myself. And I think that’s a merry-go-round in the background. That or a deflating beach ball. You decide. 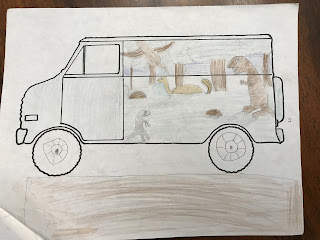 With all the critique of my seventh-grade art techniques, I have to admit that I really like this last page. Dinosaurs were one of my favorite things growing up, and I knew everything about the different kinds. These four little guys make me incredibly happy. If I was ever to add an artistic wrap to my vehicle, this would be it. As long as I don’t have to draw it again ... it’s been a while! Do you still have some childhood drawings and other art that make you smile?
Around the House Crafts