The Prophecy Of Messiah 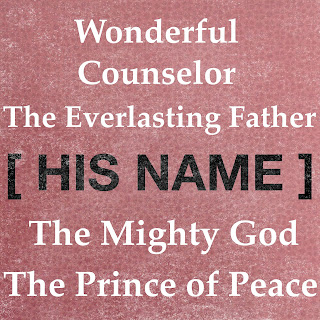 Most people think that the story of the Messiah begins in Matthew 1 with Now the birth of Jesus Christ was on this wise… That’s the way a writer would look at it. It’s like starting a story with “Once upon a time.” Catch your readers right from the beginning so they’ll read the entire story.

However, the Christmas story is actually told earlier, in the book of Isaiah, with the promise of gospel grace for the Israelites.

For unto us a child is born, unto us a son is given: and the government shall be on his shoulder: and his name shall be called Wonderful, Counsellor, The mighty God, The everlasting Father, The Prince of Peace. Isaiah 9:6

The chapter before this verse ended with deeply depressing words - trouble, darkness, dimness, anguish, even more darkness. This prophecy would break the heart of any hearer, and it would seem that all hope was lost, based on these words.

But the Lord God never leaves His people without hope. The words Isaiah writes next are the promise of the Messiah who would be the sacrifice bringing light into the darkness. He pens words that seem to say the child has already been born, that God had already given His Son. How could Isaiah write this when it would be hundreds of years until the birth of Jesus Christ?

It’s the same reason we pray, then thank God for hearing and answering our prayer before we see His answer. We pray believing that we will be heard and that God will do what is best for His glory and honor.

Isaiah is able to praise God for sending the Messiah because he believed beyond a shadow of a doubt that God would do as He promised. Isaiah was thanking the Lord for this wonderful, mighty, everlasting Prince that would save the people from their sin. And how did Isaiah know about that promise?

And I will put enmity between thee and the woman, and between thy seed and her seed; it shall bruise thy head, and thou shalt bruise his heal. Genesis 3:15

Turning all the way back to the first book of the Bible, God told the enemy that there was coming a time when the Messiah would come and the law would no longer be necessary. There would be ultimate victory over evil, and there would be a sacrifice for the souls of men. God had already promised the coming Savior, and after only two chapters of Scripture.

So when Isaiah was given the words of his prophecy through the inspiration of God, he must have remembered the Old Testament writings that he knew by heart. He was able to write about the coming Messiah who would humble Himself, choosing to walk among men when His rightful place was a heavenly throne. His love was so expansive that He was willing to be born in a barn to a young girl just so He could be the atonement for sins. His humility would turn to triumph, just as we read in these two Old Testament passages.

As you read, study and share the Christmas story this season, go back and reacquaint yourself with how the whole story began. This is how we see the omniscience of God, the depth of His love and His desire to be at the heart of our celebration today and all year long.
Christmas Scripture