How To Teach A Dog To Stop Barking At Airplanes 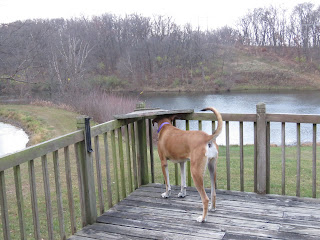 I know this doesn't sound like a typical problem for every dog owner, but let me tell you what life has been like at our house the past few weeks.

On an ordinary afternoon, Molly was watching the property from her favorite spot at the window when an unfamiliar noise got louder and louder. By the time I got to the window, the helicopter - presumably on its way to the hospital - was just feet above our house. Unfortunately, Molly not only saw it and heard it but felt it as the entire house vibrated. We could actually see the pilot's face, it was flying so low.

This was a traumatic event for the Molly dog, as it shook her both literally and figuratively. For many days after that, she would watch the sky outside on our walks and inside from one of our many windows. As soon as she saw a plane, she would whine, bark and pace in an attempt to make it go away. It sounds funny, but it was truly affecting her emotionally. Even if all she saw was the jet trail, she would bark until it got out of sight.

While this would be easier to control with a small dog, with a Great Dane it's quite different. We've found a system that works for Molly, and I hope it will work for you in your own lack-of-control situations.

1. Say no loudly and firmly. Don't say her name, don't chase after her. Just say no.

2. Then tell her to come. If she doesn't get to bark, she needs to know what is acceptable. Take away the bad and replace it with the good.

3. Give her a sit command. You want her full and undivided attention. If she doesn't already know the command, now would be a great time to teach it. Not only will it distract her from returning to the bad behavior, it will strengthen the bond between the two of you.

4. Praise her like crazy. Make a big deal over it, like you played fetch and she brought you back a $100 bill. Let her know that the good behavior will get her love and treats while the barking-at-a-plane behavior won't.

5. Now play for a few minutes. By the time you're both worn out, the lane will be long gone. Repeat this process as many times as necessary to break this annoying and anxiety-causing behavior.
Pets