What About When God Takes Things Away? 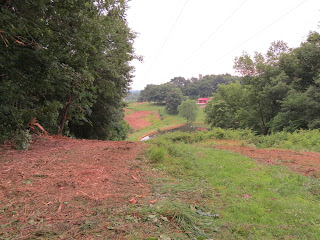 There is a power line that runs diagonally across our property. It stretches across many, many properties in our area, and the power company has a right-of-way underneath the lines.

After many years of not maintaining that area under the lines, they contacted us last week that they'd coming onto the property to trim. I appreciated knowing that in advance, even though they're very hard to miss.

After a few hours of cutting, we all realized that this was going to be a larger project than expected.

There are distance requirements that trees and other growth can be from the power lines, and we were well beyond that since they had neglected it for years. So here came the special machine that eats up the trees and branches as it goes, leaving a brown path in its wake. 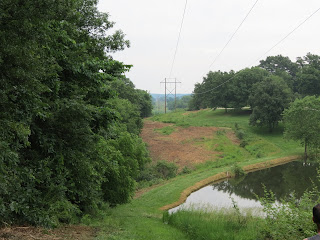 From the house, it looked terrible and destructive. The trimmers were taking out foliage all the way up the ridge, following the path of the power lines. Where there were once green, lush trees, there was a dead, open space.

Not to mention that they had taken out my blackberry bushes. These are the ones I photographed for you a few days ago. I was devastated by how much they were taken and how I wouldn't get to harvest those berries. I had my heart set on climbing the ridge, harvest those berries and making some amazing new recipes.

I'm not ashamed to tell you that I cried as I watched the bushes torn out. Hard. Hot tears. Our land was being leveled because someone else hadn't done their part in taking care of it.

I prayed for hours that God would find a way to bring something good from this situation. I was finally able to leave our land in His hands, because it's not really ours anyway, and I came out of my prayer closet with peace.

When Danny got home, he explained that this clearing was actually a good thing. I didn't realize that the land underneath those ground-up limbs and leaves would grow back even more green and lush than it was a week ago. The flat land would be more beautiful and inviting because the overgrowth was cleared out. A year from now you won't even know anything was done - it will look natural and healthy again.

They were also taking out the sticker bushes that attack anyone trying to clean them out. They were even willing to take out a large section of them on the other side of the power lines so Danny wouldn't have to cut them by hand. The trimmers had the right machine for the job, saving hours and days of back-breaking labor in the hot sun. Danny was thrilled that they were open to helping him with the project.

And as a special gift to me, Danny took me on a walk through the forest area on the opposite side of the property from where they were working. As romantic as it was to traipse across our land and just talk, I was in for a surprise, too. In just a few minutes of walking, Danny pointed out dozens upon dozens of blackberry bushes that I didn't even know existed. 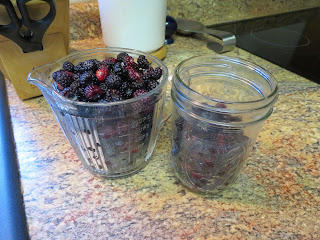 I had been so upset about and focused on the handful of berry bushes on the ridge that I had missed the amazing blessing God had for me in other places. And blessings in abundance. I praise the Lord for a husband who knows the desires of my heart and is willing to hold my hand and lead the way.

Instead of the few berries I would have gathered over a few days, I'm able to collect several cups a day over several weeks. Some of the bushes on this side of the ponds are almost done producing fruits, while others are just beginning to lose their flowers. I'll be picking berries for weeks!

For I know the thoughts that I think toward you, saith the LORD, thoughts of peace, and not of evil, to give you an expected end. Jeremiah 29:11

God knew what this week would bring, even if I didn't. And I don't have to know. I just have to have faith in the God who has already gone down the path before me. His thoughts toward me will always be of peace - never evil - and bringing me to the place He would have me be.