So Your Outdoor Party Has To Move Inside ...

June 16, 2015
One of the dangers of scheduling any type of outdoor event in Iowa is the chance of bad weather. This year, and this time of year specifically, as been incredibly rainy, so having a back-up plan is always a good idea. 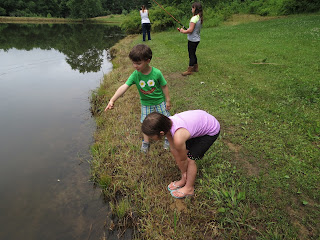 We planned a small bonfire party over the weekend, knowing that there was a pretty good chance of rain. It's been raining (continuously) for several days (weeks, months, decades), but we were able to get down to the pond between storms for a little fishing. 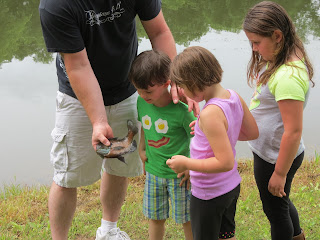 When there are kids involved, fishing is always a good plan. We didn't keep any, though many fish were caught. Danny grilled many other things and even came up with his own BBQ sauce recipe. Because of the rain, we weren't able to go out and join him while he grilled. He was camped out, braving the rain - so brave! 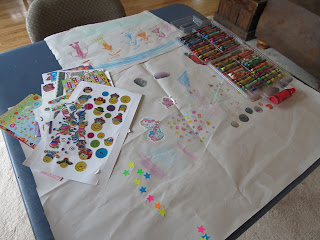 I had planned on letting the kids draw with sidewalk chalk all over the driveway. This way they would all be together in a central location. The storms halted that project, but we were able to do a similar act project inside. Instead of chalk they had crayons and stickers, and instead of the driveway they used our big roll of newsprint. This indoor version of sidewalk drawing was a huge hit, and I was given a couple of the drawings for a memento of the day. 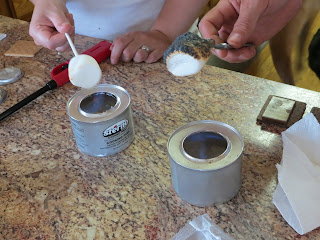 After several days of rain, we also had to rethink our bonfire. The burn pile up by the barn has been ready to go for ages was too wet on Saturday. There was no way we were passing up a s'mores opportunity, so that activity came inside, too. A couple of cans of Sterno and we were set. Danny did most of the roasting so the kids wouldn't get hurt (or set the marshmallows completely on fire). We had two kinds of graham crackers, chocolate, peanut butter cups and large marshmallows.

When your outdoor party has to be moved inside, there's no reason to be disappointed. Every outdoor activity has an indoor alter ego - you just have to be creative and find it!
Around the House Crafts

January 16
Today’s reading: Exodus 1-3
Thought for the day: Whether it's the years spent in the palace, decades on the backside of the desert or hours spent in heart-wrenching prayer, remember that this too shall pass, as God always has His way in our lives.