The Moss Is Always Greener 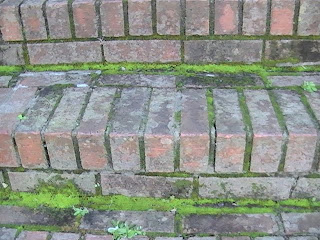 I was getting so embarrassed! It seemed like every day our front steps were getting greener and greener - and I don't mean in an eco-friendly way! The moss that had been there since we moved in was slowly taking over the surface of the bricks, making them a little slippery and very unsightly.

So while doing some research I learned that there is a hard way and an easy way to remove moss.

Hard way: Pour boiling water on the moss and scrub. Not a bad idea if you have time, energy, patience and elbow grease. I think I have 1 out of 4. (You figure out which one.)

Easy way: Use bleach to coat the moss. When it turns white, power-wash it off.

Can you guess which I did? 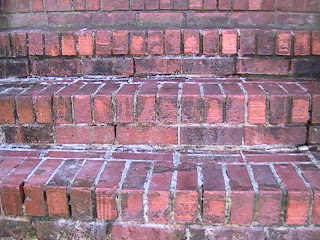 Since I really didn't feel like spending all day Saturday on my hands and knees on the steps, I poured a bottle of bleach over the moss-infected area and let it sit. (The experts also suggest putting it in a spray bottle and soaking the area that way.)

It turned white within 10 minutes, but I let it sit longer so it would get down deep - I wasn't about to do this all again.

Then I turned the garden hose nozzle onto "Typhoon" and watched in amazement as the now-white moss flew off the steps. As you can see it even whitened my grout! There's still some scrubbing to do in the little crevices, but this process saved me a ton of time and effort.
Around the House

We're having so much fun putting together goodie bags and door prizes for our upcoming ladies retreat at the church. So many of our ladies have donated craft supplies, decorations, time and energy to treat our visitors to an amazing time. These keychains are just one of the gifts some of the attendees will find in their bags.

All you need to make them are a variety of beads, some fairly thin yet sturdy cord and a jump ring.

Cut a length of cord, fold it in half and string it through the jump ring.

String matching beads on both sides.

And tie it off with a double knot. So simple, yet so pretty.

Here's another variation: Cut a length of cord, fold it in half and thread it through a jump ring.

Tie one or two beads on one side and tie it off with a knot.

Make the other side longer with additional letters and beads before tying it off.

Make a variety of lengths, colors, patterns and phrases so no two are alike.
Read more

September 15, 2009
One of the characteristics of a woman who is leading a victorious Christian life is virtue. A virtuous woman is willing to conform to both moral and divine law, someone who glows with purity and goodness. Sounds like an overwhelming goal, doesn't it? Well, just like everything else in our lives, God has given us exactly what we need to triumph in the virtues He would have us attain.

"And now, my daughter, fear not; I will do to thee all that thou requirest: for all the city of my people doth know that thou art a virtuous woman" (Ruth 3:11).

Ruth was a poor widow, one who chose to leave her native Moab for her mother-in-law's home town of Bethlehem. She was given the choice to stay behind, but her relationship with Naomi was more important. Ruth was devoted to both her former family and the new family that would greet them (Ruth 4:15).

While she was forced to work in the fields to supply the household's needs, Ruth worked with diligence and stamina. In the second cha…
Read more

My sweet and loving husband gave me my birthday present three weeks early.

I had asked Danny for a bench that I could put down by the big pond. I wanted a place where I could go, pray and relax away from the struggles of the day. He blessed my heart in so many ways by creating this bench out of landscaping timbers with his own two hands. His talents amaze me all the time.

But what meant even more was that he was willing to brave 110 degree temperatures to finish this just for me. That speaks volumes about the loving heart of this wonderful man. Thank you, Sweetie!

I'm so excited to get it down by the water and spend some time with the Lord. The first thing I want to do is thank Him from the bottom of my heart for the husband He gave me. I'm blessed beyond measure.
Read more

Today’s meditation: There is no need to seek revenge when the God of the Universe is fighting for us. We only have to wait and trust Him to handle our situations.