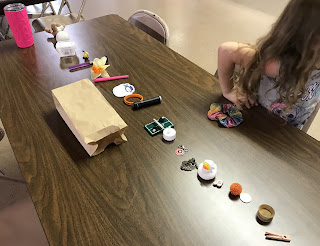 On Wednesday night, our children and teens all met together for a night of games and cake and ice cream. We’ve been studying a lot of deep topics recently in youth group, so we needed to wind down a bit and just enjoy each other's company.
I set up tables in the gym as game stations, and we worked our way through three of them. On one were stacks of worksheets - mazes, codes, word searches, crossword puzzles and coloring pages - that they could work through on their own or race to the finish. On the second was a stack of paper plates, and we practiced our “drawing with our eyes closed” skills and learned how to help each other draw on top of our head. Trust me. It was hilarious.
At the next table, all I had was a closed up paper bag and my iPad. They were intrigued to say the least and wanted to do that game first. I gave the first girl the bag and had her pull out one item. This was apparently a challenge because there were more than 20 items in it and there was a tremendous temptation to peek. Once she pulled out the stuffed bear, it was her job to start telling a story that included that bear in it.
When her part of the story was done, she passed the bag to the next person, who chose an item without looking and continued the story. By the time we were done, we had a long, convoluted story that was so funny and absolutely perfect. And all you need to play this game is a bag full of stuff, which keeps them busy for quite some time if you encourage them to be creative. Our story, which I’m sure will win awards some day, is as follows:
One day for my birthday, my grandma got me a teddy bear. That bear meant a lot to me because she made it for me. She had handmade it and it said I love you on the shirt. Then I went golfing with my dad. We were golfing and I was playing with the ball when wee discovered there was an empty box! It was suspicious. Flying around the box, was an equally suspicious looking bumble bee. He was tiny and looked a little grumpy. Had he been in the box at one point? After I saw the bumble bee, I went home and did my makeup for fun. After that, I went out and showed my parents, and they made fun of me! And then I went outside and then I picked a flower for my hair. After I was done with the flower, I smelled it and put it back in the grass. Then I went back inside and wrote quotes using a very special pen. While I writing, I looked out my window and saw a snowman! This would have been no big deal, except, it was May! That snowman had a bracelet that said “Jesus’ Love Shines Bright.” And that made me want to read my Bible. After I looked at the wristband, I went inside and it was dark and spooky. It looked dark and spooky, but I looked around with my flashlight and there was nothing there. The light went all the way to the wall, then all the way to the ceiling. After I was done using my flashlight, I knew something was there, but it wasn’t. Then I played ping pong with a ghost I saw! I won! For my victory party, I invited the ghost to come over for tea. We lit little tiny lights, and we ate tiny little sandwiches and we played tiny little games. After we played games and won prizes, the ghost won a Captiain America charm. He put it on his backpack, (even though the backpack was too heavy and he couldn’t carry it). Then I went home and I put my beautiful owl necklace on. After that, I got in the bath and had my rubber ducky. I put bubbles in it and put my duck in. Then I squished it, put water in it and I squirted my sister with it. So, while I was in the bathtub with my rubber ducky, I sang him the song “Rubber Ducky” from Sesame Street, because it is the best song ever. After I sang, I got him a toy, and that toy was little bitty spiky ball. After I was done with the spiky ball, I went to get my 500-cents and I was looking at it and I bought something with it. After I bought something with it, I bought a bowl, too. It was so cool. I loved it so much. It was a mini bowl, and I love it more than all the bowls I have! It is made out of wood, so it’s so cool. To make a long story short, I put all my purchases back in the bag and clipped it closed because I didn’t want to lose any of it.
Youth Group