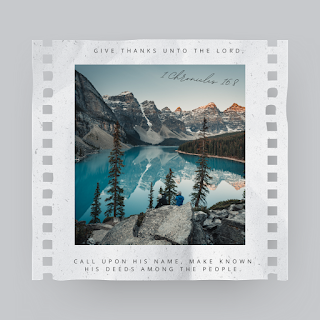 Often when we think of giving thanks in Scripture, we immediately go to the book of Psalms or Paul thanking God for the churches in his epistles. Especially now that we’re into November - a month that generally focus on thanks and giving - it’s so important to look all through the Bible for examples of who gave thanks, when and why.
In Exodus 25, God gave Moses exact measurements and specific directions for how to build the ark of the covenant. Wait, what does the ark have to do with giving thanks, you might ask. Stick with me, kid, we’re going places.
This is one of those passages of Scripture we often read over because we don’t know how big a cubit is (18 inches), we don’t know what rings and staves are (they're on the sides of the ark to carry it) or we get lost somewhere between mercy seat and cherub. But these details are part of God’s word for a reason. Our God is a God of order with nothing left to chance or misinterpretation. This was an opportunity for Moses and the people of Israel to show their obedience by following God’s word to the letter.
So what was inside the ark? I know, you’re still waiting for the thanksgiving. Let’s look inside the ark first. In Hebrews 9:1-4, we learn that there were three miracles inside: manna, Aaron’s rod and the tables of the covenant. Manna was bread sent directly from heaven. Aaron’s rod shouldn’t have kept growing, let alone flowered and budded. And the tablets were God’s word spoken directly to mankind. What a powerful, miraculous trio of objects for the people to have.
The ark of the covenant had been moved and passed around for such a long time, but in 1 Chronicles 16, King David finally has the ark in the tent he had pitched for it. Immediately after it is tucked away by the Levites, offerings are offered and God is given glory in congregation. It was now home among the Israelites, and it was a time to celebrate being in this special presence of God.
Yes, now is the time for thanksgiving. The translators tell us that this was a brand-new psalm David sang, and just reading it gives us a taste of what he was feeling in those moments. Sometimes the only words that can express what we feel are in music. In 1 Chronicles 16:8-36, we read David’s psalm and can see exactly what he was so thankful for:
- God’s name
- His deeds
- His wondrous works
- His strength
- His marvelous works
- His wonders
- His judgements
- His covenant
- His oath
And that’s just the first 10 verses! David kept going, kept remembering and kept writing all these verse of thanksgiving to the Lord, just for being the Lord! And I would imagine he ran out of scroll to write on before he ran out of reasons to give thanks to God.
What would your psalm of thanksgiving look like today? Would you be able to easily write out a list of God’s wonderful works? Or would you have to sit down and really think about the blessings in your life?
I pray that as we move through November, we’ll each have time to really search our hearts and the Scriptures to focus on thanks to God. If we spend the entire month this way, the habit of giving thanks will carry over into the year to come. And what joyful hearts we would find there.
Scripture