Ecclesiastes 12:13 - All Of Life Comes Down To This 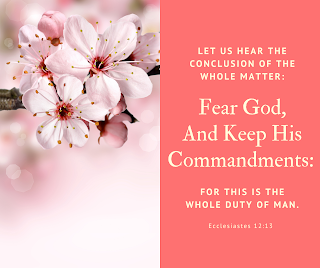 If you were to sit down with your journal and a cup of coffee to write out everything that’s weighing heavy on your mind, how long would that list be? With the chaos in the world, stress in our families and the weight of our responsibilities all pressing in at once, you might need more than one notebook.
When I recently asked our youth group to make a list like this, they filled an entire blackboard. Even our teens are facing layer upon layer of stress and anxiety. And if it’s that tense for them, add in all the extra concerns in our adult world and it’s no wonder we’re all feeling a little overwhelmed.
So what I shared with the youth, I share with you today in the hope that God will use it in a mighty way in your heart and mind.
Let us hear the conclusion of the whole matter: Fear God, and keep his commandments: for this is the whole duty of man. Ecclesiastes 12:13
That’s it. An entire lifetime of conflicts and concerns all brought down to the lowest common denominator. I told the teens we solved all the world’s problems in just a few minutes. They were skeptical, so we dug in a little deeper.
Solomon was the wisest, richest and most successful man who ever lived. His life all went downhill, though, when he had marriages and relationships with hundreds upon hundreds of women. They drew him way from the True and Living God to worship the gods of their own lands and regions. It took some pretty dramatic and traumatic events in his life to get his attention, but he finally understood the whole purpose of life.
In writing the book of Ecclesiastes, Solomon details the good and lavish life he had lived. He built buildings and planted crops and covered everything he owned with gold and had the best relationships he could have. Then he shows the other side, when he turned away from God and let his heart be turned by other people. In the end, it was all vanity, he wrote. It was all worthless and trivial when compared to everything he had while in fellowship with the Lord.
After 11 chapters of this detailed story, Solomon says everything in life comes down to two rules: fear God and follow His commandments. That’s it. It’s easy to make it more complex and terribly difficult, but every single situation we face has just two requirements: fear God and follow His commandments. Really. The wisest man who ever lived said that’s the conclusion of the whole matter. Have a reverential awe of God and do what He says to do. Know Him and know His word.
If you’re struggling with a relationship in your life - fear God and follow His commandments. Know what He says about how to interact with other people.
If you’re anxious about health and pandemics - fear God and follow His commandments. Know what He says about how to manage your fear.
If you’re concerned about issues at work - fear God and follow His commandments. Know what He says about being a good worker and interacting with coworkers.
If you’re overwhelmed by politics and the condition of our nation - fear God and follow His commandments. Know what He says about the people He allows to be in power and the difference you can make in your country.
I can’t tell you how to fix everything you’re dealing with right now, but I know the God who can. Learning what He wants from you means fearing Him and following His commandments, and to do that, you have to read His word. The more you learn, the more you can apply to your life. The more you apply, the more you understand. And the more you understand, the closer you are to Him. And the closer you are to Him, the more you can help other people when they have the same questions.
My prayer for each of us this week is that we’ll take all those concerns circling in our brains and apply Ecclesiastes 12:13 to them. Let’s get active in our faith and learn the truth about what God says and what He wants. Then we can know how He would have us act and react in each of those situations, and what a joy that will be!
Scripture