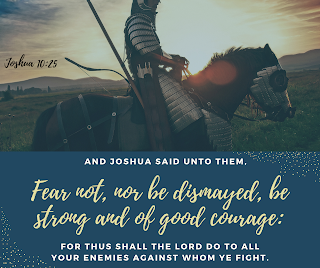 When we’re growing up, we often need to be told something more than once. Make your bed and clean your room. Comb your hair and brush your teeth. Don’t eat an entire carton of ice cream in one sitting. Put stain remover on your shirt immediately. Don’t touch a hot stove. Be respectful and always say Yes Ma’am and Yes Sir.
Why do we have to be told these things over and over again? Could it be because we’ve got thick skulls and we need a little extra reminder of what works and what doesn’t? And it’s not just kids, right? Even as adults we have to have some things pounded into our heads. Like, don’t eat an entire carton of ice cream in one sitting. Yep, I repeated that one, too.
Even Joshua, the military general of the armies of Israel, needed some reminders in his life. The minister of Moses found himself in many challenging positions throughout his life, and he saw God work more miracles than we can imagine for the people and through Moses. Now, here he was stepping into that role and facing some major obstacles along the way.
In Joshua 10, we read about the five kings who decided to declare war on Gibeon, the people Israel had made a treaty with to protect. That means Israel’s army was about to go into battle with not just one enemy, but five enemies. As the mighty men of valor were headed up to Gilgal, God had a few words to share with Joshua.
And the LORD said unto Joshua, Fear them not: for I have delivered them into thine hand; there shall not a man of them stand before thee. Joshua 10:8
Throughout Scripture, when God tells someone to be not afraid, it’s because they’re already afraid. So God already knew the fear in Joshua’s heart and wanted to put a stop to it now. Then He promised a victory for the Israelite army so impressive that not even one enemy would remain standing. God squashes fear by reminding us of who He is.
And God was true to His word. The armies were defeated and the kings were holed up in a cave. Joshua brought the kings out to the people and had them stand on their necks, sending a message of defeat to everyone. And then he says something we’ve heard recently...
And Joshua said unto them, Fear not, nor be dismayed, be strong and of good courage; for thus shall the LORD do to all your enemies against whom ye fight. Joshua 10:25
God knew what Joshua needed to hear to be courageous in the face of the enemy. He also knew that Israel would need to hear these same words from Joshua in the near future, but they couldn’t be empty words to rally the troops. They had to come straight from Joshua’s heart because he had experienced their truth for himself, not just thrown out there as random thoughts in a cheerleading speech.
Without hearing God’s word, experiencing His miracles and understanding His truth, Joshua couldn’t have spoken words of encouragement to the people with any honesty. Fear not became another fear not.
But after defeating all the kings of the south, Israel’s army would soon have to face the kings of the north. Weary from five recent battles, Military Leader Joshua was facing more war.
And the LORD said unto Joshua, Be not afraid because of them: for tomorrow about this time will I deliver them up all slain before Israel: thou shall bough their horses, and burn their chariots with fire. Joshua 11:6
So if we use what we learned earlier - that God knows Joshua’s heart and that he is already afraid - it means that Joshua is afraid again. Even after miracles and victories and answered prayers and completed promises, Joshua is afraid again. God has to remind him that these enemies will be defeated just as thoroughly as the last enemies.
Let’s get this clear right now - we never arrive. We don’t grow to some super-spiritual place where we’re perfect Christians, we say the right things and do the right things and feel the right things and think the right things all the time. That’s just not how things work, no matter what we’d really like to think. And the blessing is that God knows this, too, and He doesn’t condemn us or get angry or frustrated with us when we have to be reminded of things. And reminded. And possibly reminded again. It’s a loop that means we’re trying, we’re listening and we’re learning.
Joshua was in a situation that seemed large and different and scary. And that’s ok. God didn’t roll His eyes and make Joshua feel stupid for needing a little pick-me-up. Our loving Heavenly Father would never do that. Instead, He said the enemy is nothing to fear because He had it all under control. He even went so far as to tell Joshua exactly how the scene would play out.
By the end of the chapter, we learn that Joshua and the Israelite army had taken the whole land, just like God promised they would. He had new experiences under his belt, had learned once again to trust in God’s promises and could now divide the land among the people. Not only had the army won the war, but their leader had been victorious over a personal and spiritual battle, as an example for those who followed his leadership.
That doesn’t mean that Joshua never had to be reminded from time to time that God is in control. You and I will still have to be reminded that God is in control. But it’s in those moments that we grow, we learn and we draw closer to the Lord. And I wouldn’t trade that for the world.
Scripture