What Does The Ground Of Your Heart Look Like? 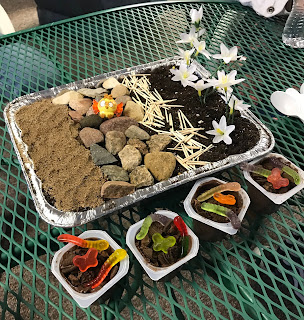 If you’re going to do a study on Jesus’ parable of the sower, you probably need to eat dirt cups while you write, right? There’s something about the combination of chocolate pudding, crumbled cookies and gummy critters that makes Bible study easier.

The parable of the sower is found in three of the four Gospels, and it is one of the few that Jesus explained verse by verse and line by line. And if He is that detailed in His explanation, we are meant to pay special attention to it.

Jesus told the parable while sitting by the sea, surrounded by a multitude of people who wanted to hear Him, see Him and just be near Him. In Matthew’s account, Jesus detailed four times the sower went out with his seeds:
* on the wayside where the birds ate them
* on stony places where there was little dirt
* among thorns where they were choked out
* on good ground where they grew fruit

The disciples first reaction after hearing this parable was to question Jesus - interesting, isn’t it? Their question was simple: why do you speak to the people in parables? Jesus then explained that the disciples had been traveling with Him and knew His teachings, while the people gathered there did not. As Paul would later write in 1 Corinthians 3, they were babes needing milk, not grown men needing the meat of the Word.

There were also many among the crowd that didn’t believe in Jesus as the Son of God to begin with, calling them dull of hearing and having closed eyes. He wouldn’t be able to teach them spiritual things because they weren’t believers at heart.

We are then gifted with the description of each type of ground and how they apply to every human heart.

* The seeds on the way side are the Word of God on the heart of unbelievers, those who don’t understand the Word to begin with, and Satan takes it away.

* The seed on the stones, where it can’t dig down its roots, are those who hear the Word, appreciate it, but it makes no lasting impression.

* The seed among the thorns breaks my heart - it’s the people who hear God’s Word and understand it, but they get so wrapped up in worldly things that they choose the world over God.

* But the seed in the good ground? That’s where we should all want to be. God plants His Word firmly in the good soil of our hearts, it bears fruit and it blesses us abundantly. And God always goes above and beyond with His promises, so our fruit isn’t just enough for the moment ... it comes out a hundred times over.

Which of these types of ground would you say your heart is today? If you’re anywhere but the good, productive soil, I pray you’ll get that right with God and get your ground turned up and ready for seed. When we ask to be used to bear fruit, He is always faithful to provide.
Scripture Youth Group