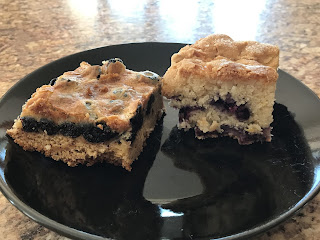 Danny had last weekend off, and we both got the urge to bake! So, just for the fun of it, I suggested a bake-off. We would make two versions of blueberry cake that we had found and see who could make it better.

His response was, let's just bake together.

So we just baked. I made mine Saturday evening and he made his on Sunday morning. When his came out of the oven, Danny's exact words were "I win."

We took them to church with us for treats in Sunday school and as dessert at the potluck lunch. I let the ladies in the adult Sunday school class know that Danny and I had each baked one, but they could decide for themselves which one they liked better.

Many of them said it was because his was still warm. Yes, I can see the unfair advantage there. But it was also SO good.

Here are the links to the two blueberry cakes we tried. We'll let you make them and decide for yourself which one you like the best. Have fun!