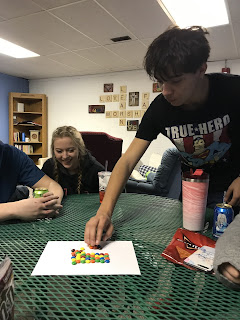 Our youth group time on Wednesday nights is divided into three parts: activity/game/catch-up time, the song service upstairs and our lesson for the evening. We’ve set it up this way on purpose so the teens (and Danny and I) can unwind for the first 45 minutes, sing and get our hearts focused on God and then have our Bible lesson.

So, as you can guess, the first portion of our evening together can be pretty hilarious. A room full of teenagers who’ve been at school all day makes for some memorable moments.

One of my favorites is a game we saw all over the Internet called Don’t Eat Pete. The idea is that you have candy lined up on a grid and one of them is named Pete. One teen leaves the room and the remaining ones bestow the title of Pete on an unsuspecting piece of candy. When the player comes back in, he can eat every candy on the grid except Pete - only he doesn’t know which one is Pete!

The strategy is to give false clues, make him question his choices and generally be a disruption. If Pete does get picked up, everyone yells “Don’t Eat Pete,” and the round is over.

That’s what it would look like in theory. Here’s what it looked like when our teens played.

- They didn’t like the grid. That’s too rigid. So we poured a whole bunch of candies onto the back of the piece of paper.

- They didn’t want to eat the candy right then, but take them off the grid and save them for later. Well, all but one teen, who decided to eat all of his and had to lay down for a minute.

- Taking them off the game board one at a time was too tedious, apparently, so they made a new rule that you could take them off in groups. If that section had Pete in it, they had to put the whole section back.

- They decided that they should startle the player by gasping loudly every time a candy was taken. This was fun, but it made the game go on forever.

- They eventually decided to question the player about every decision they made as they made it. This became a philisophical discussion about why we do what we do and how to make another person doubt themselves on a deep, emotional level.