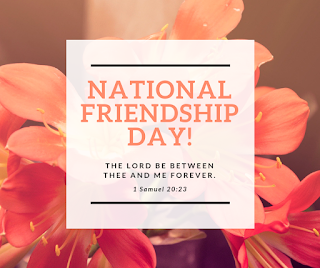 Love isn't reserved for one day each year, and it's definitely not saved for that one special person. Love is a gift that comes directly from the lord Himself, and all those amazing people in our lives can share in that blessing when we're willing to share it around.

Today is National Friendship Day, and there is no better time to celebrate our amazing friends that the week of Valentine's Day.

One of my favorite stories about friendship is found in 1 Samuel. From the moment David and Jonathan met, their hearts were knit together. They fought for each other, protected one another and stayed friends through some incredibly difficult times. And when the moment came to save David's life, Jonathan was right there in the thick of things.

King Saul, Jonathan's father, knew David had been anointed king, and he hated David for it. After attempting to kill David several times, Jonathan knew he had to get David out of the kingdom. Pretending to be out for target practice, Jonathan let David know that it was not safe for him in the kingdom anymore, but the moment was the among the most difficult of their lives.

And as soon as the lad was gone, David arose out of a place toward the south, and fell on his face to the ground, and bowed himself three times: and they kissed one another, and wept with one another, until David exceeded. And Jonathan said to David, Go in peace, forasmuch as we have sworn both of us in the name of the LORD, saying, The LORD be between me and thee, and between my seed and thy seed for ever. And he arose and departed: and Jonathan went into the city. 1 Samuel 20:41-42

Their friendship was just a relationship - it was a covenant. It was stronger than a promise and sweeter than an agreement. Their friendship would extend beyond the two of them, encompassing future generations of their families, knitting them together forever.

After this heart-wrenching moment, Jonathan and David only saw each other one more time. After being separated again, Jonathan was killed in battle. David mourned the loss of his friend, even writing a poem and song that expressed his love and sorrow. You can read it for yourself in 2 Samuel 1:17-27

This beautiful example of love and friendship shows us exactly our Christian friendships can look like in our day and time. Love doesn't have to be romantic - instead it can be deep devotion and concerned caring for all of our loved ones, especially our friends.

I pray that during this Valentine's week, we'll find ways to show love in personal ways through each of our friendships. The world can never have to much care and compassion in it, and who better to start the week with love than us.
Scripture