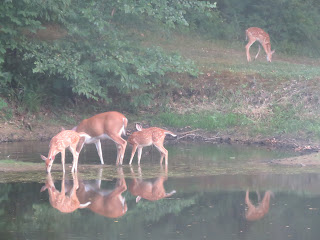 So a few weeks ago we had twin raccoons on the property, and we thought that was pretty cool. But it was nothing compared to this week when we saw a doe and three fawns by the little pond. They were absolutely stunning to watch, as they looked for their breakfast and had a romp in the water. 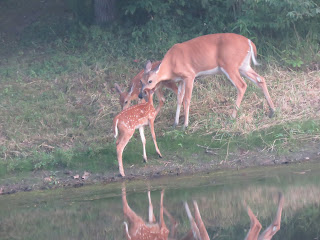 Two of them stayed very close to their mama, and we were able to see them nuzzle her and help her pull leaves off the trees. They enjoyed playing in the water a little and all seemed to be in great health. We would much rather see them this way than in a rehabilitation situation like we're used to. 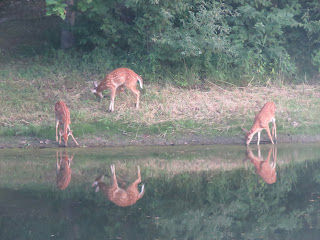 The third fawn was larger and didn't stay as close to the doe as the other two. Our assumption is that this baby lost its own mother and had been adopted by this one. If so, that's one brave mama to take on three fawns all at once. We're looking forward to seeing them on the property and watching them grow to adulthood.
Around the House