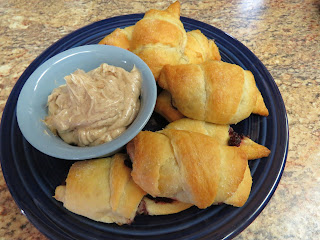 Wild blackberry season on the property is over, but I've tried so many blackberry recipes that I'll still be sharing them during the upcoming weeks.

I'd never made flavored butter before, but this cinnamon honey butter is perfect for dipping, spreading or swimming in, whichever you prefer. Once you've made it and if you have any left, store it in the refrigerator and then heat in the microwave for 10-15 seconds to make it soft again. (Not enough to melt it, but just enough to soften.)

1. Preheat oven to 350 degrees or as directed on the crescents package.

3. Unroll the dough and break into triangles. Spoon a small amount of sugared berries onto the large end of the triangle, roll dough into a crescent and place on an engrossed baking sheet.

4. Bake according to package directions, until tops of the rolls are browned.

5. While crescents are baking, use the whisk attachment of a stand mixer to whip the butter until fluffy, about 1 minute. With mixer on medium, add other ingredients until combined and smooth. Once combined, increase speed and whip until fluffy.