Craft Show Booth Layouts And How They Change

August 11, 2016
Having two craft shows on back-to-back weekends makes for a challenged mind. One is indoors, one was outside. One was almost a whole day, one is just three hours long. But that's where the differences stop for the most part. 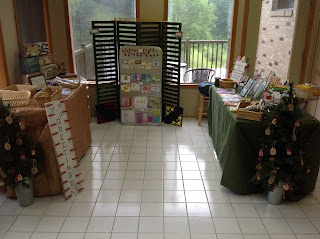 The way I practice my set up is the same for both. I partition off the 10x10-foot space that the tent covers and then set up my tables. I love the two vertical shelves in the back, and they'll hold up the oil drip pan that I display my magnets on. 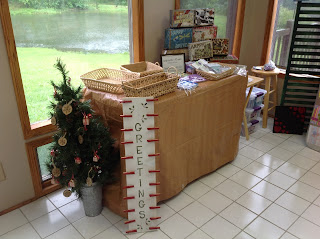 From there, I cover the tables with tarps to keep the "Stuff From Trees" theme and decorate the two trees with music note and snowflake ornaments. I decided not to take the Christmas card display board, but this is where I would have put it. 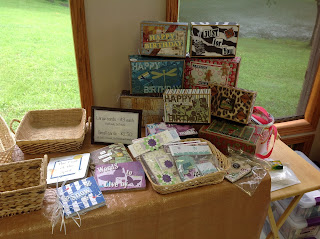 I made this table gift-themed with my upcycled gift boxes, tag sets and baskets for greeting cards. There is also plenty of room for some random altered books and albums. 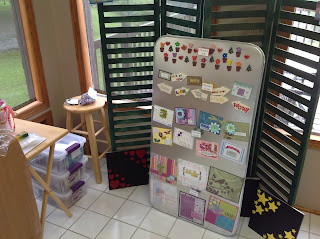 Since I'm all about symmetry, both sides of the booth are mirror images of each other with two screens, two chalkboards, two stools, two tables ... you get the idea. 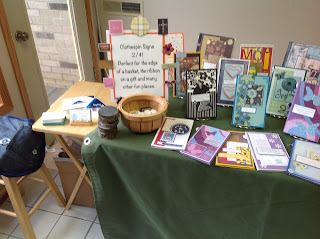 The other side I planned as a paper crafts table - journals, explosion boxes and clothespin signs. 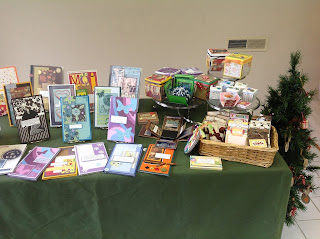 I tried to have as much height on each table as I could without it looking too cluttered and junky. I bought this cake display stand for the sole purpose of giving three more layers of height to the table. 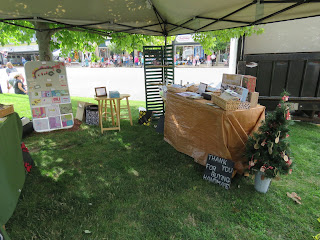 At the first show, the outdoor one, I had to modify my layout idea some. When you're not sure of the exact setting you'll be in, prepare to be flexible about everything. (This works in life, too, as well as booth layouts.) 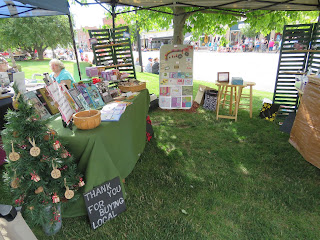 I was able to keep the two sides looking the same, but the ground under the tree where I was to set up was incredibly unloved. I needed up strapping the two vertical displays to the back tent posts just so they wouldn't get blown over. I needed up not using them, though, as the binder clip photo holders I planned to display on them wouldn't stay put in the wind, either. Lesson learned. 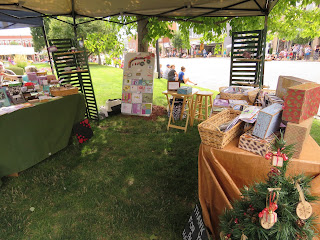 This left a huge open space in the back, so I leaned my magnet display against the tree instead of the green stands. It wasn't the best option because of the wind, but short of duct taping it to the tree, there wasn't much I could do. 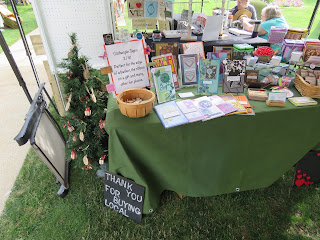 I left the table layouts the same, which worked wonderfully, and I was able to direct customers back and forth across the booth for items that were in the same themes and colors. Many people were drawn into the tent by the ornaments on the trees, which I had set up at the very outside edges of the tent entrance. This idea is definitely a keeper and will be even more important at the indoor show. 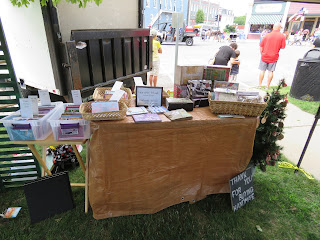 This weekend I'll be at the shorter indoor show, so I won't have to take as much with me, as tables will be provided and I won't need the tent. I'll also be able to stick to my original layout because (hopefully) the floor will be level, making those tall green displays work as my back wall. Please pray for me, that all will go well and God will be honored. I love the idea of being able to send Scripture and gifts home with people who want to share them with others.
Crafts Stuff From Trees