Getting The Grape Vines Ready For Spring 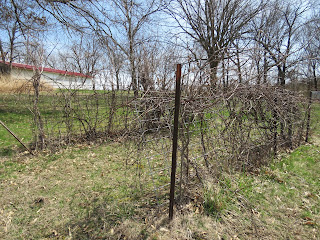 Nothing has been done with our two rows of grapevines in the more than four years that we've lived on this property. But you couldn't tell from this picture, right?

What gave it away? The trees growing up between the vines? The gnarled knots of trunks and canes?

I learned that in Iowa, the best time to prune grapevines is from late February to early April. Since the end of that time period is ... I don't know ... this week, it was definitely time to get out and see what I could do with them. 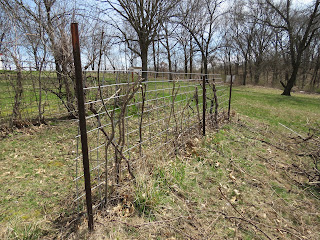 Mind you, I know next to nothing about being a husbandman. I can show you some Scripture about the vine dressers' job, but that's about the extent of it.

Thankfully, there is a local nursery that has tons of information and several helpful employees. Everything I've learned about grapevines I learned from them, so hopefully I now sound like I know what I'm talking about.

We have two rows of fencing held up by rebar on the ends. I had to do a little finagling to get them back upright,  but they're perfect for the number of vines we have. 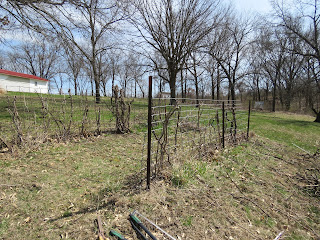 It only took about an hour to get everything cut down to the top of the fencing. Using lopping shears, I cut away most of the dead or dying canes and most of the unwanted trees pushing their way in. There are still several places that need to be thinned out, but this was a good place to start.

I'm interested to see if the grapes will grow differently this year, as there is much less growth sucking up the water and nutrients. It seems like we're starting all over, but the sickly little grapes that came out last year convinced me that something needed to be done.

As the summer months progress, I'll keep you up-to-date on they're progress and whether I followed directions well. It will be fun to watch and see what the grapes are actually supposed to look like, as well as what of the vines can be cut out next year.
Around the House