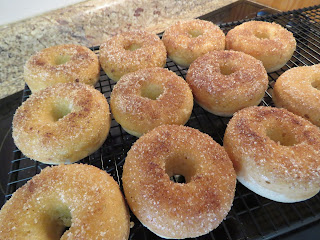 I've been making an effort lately to clean out the pantry and use up what I can before they reach their expiration date. (And save money by using what I already have on hand.) Many three- and four-ingredient recipes still require some out-of-the-ordinary item, so it can be difficult to make things from scratch.

But donuts are not this way. Donuts — lovely, scrumptious, perfect donuts — may have a number of ingredients, but they're all ones you already have in your kitchen. Plus, if you bake them, they're quick, easy and slightly healthier.

But who wants to be healthy when they're eating a donut?

1. Preheat oven to 350 degrees. Pull out two non-stick donut pans. (No need to grease or spray them.)

4. Slowly pour wet mixture from the sauce pan into the dry ingredients bowl. Stir until combined.

5. Spoon dough into donut pans. There will be enough dough to make 9-10 doughnuts.

7. Remove from oven and place entire pan on a cooling rack.

8. While the donuts begin to cool, melt a stick of butter in the microwave, beginning with 30 seconds. Stir and continue until completely melted.

9. Combine sugar and cinnamon in a separate bowl.

10. Invert the pans and remove the partially cooled donuts. Dip them first in the butter, then in the cinnamon-sugar mixture. Return them to the cooling rack. Eat as many as you'd like, share what you want and store the rest in an air-tight container for 2-3 days.
Cooking