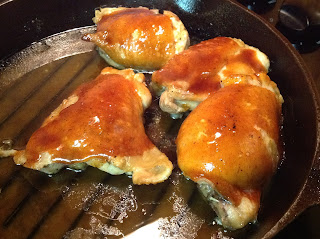 Chicken has been on sale several times lately at our local grocery store, so I've been able to stock up several times and buy several different kinds of chicken.

Most recently I was able to get four chicken thighs for $3, so I bought two packages to make some BBQ chicken on a grill pan in the oven.

It's definitely a recipe we'll be repeating.

I doctored up my own BBQ sauce, so I've included that part of the recipe as well.

2. Heat the olive oil in an oven-safe grill pan over medium-high heat. Once heated, reduce heat to medium.

3. Salt and pepper both sides of the chicken and sear two minutes on each side.

4. Place the grill pan with seared chicken in the oven and bake for 25-30 minutes or until cooked through.

5. While the chicken is baking, prepare the BBQ sauce with the remaining ingredients. Refrigerate until chicken is finished.

6. When chicken is cooked through, pour sauce over them. Bake for 5 more minutes. Serve immediately with veggies.
Cooking