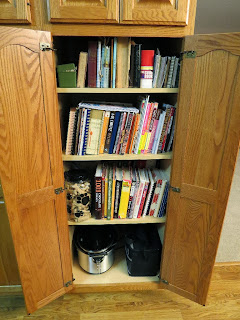 Now that the holidays are over, I'm rearranging the furniture.

And it's a chain of events. Moving one piece meant moving something else which led to rearranging another piece and finding new places for something else.

So here's the first part of the chain. I needed a place to put all of my cookbooks ... and there are a lot of them. (I'll explain why they had to be moved in another post.)

But in order to have this entire cabinet available, I had to rearrange half the kitchen. Maybe I'm the only one who's ever done this, but when we moved in, I just unloaded boxes and put things where I assumed they would be handy. Unfortunately, that's not the case two years later.

So all of the kitchen bits that I had on these four shelves found new homes. And they're homes that make a little more sense. That meant I had these super-deep shelves to put my cookbooks. On three of them, there are either more cookbooks behind them or some kitchen equipment that I rarely use, so I don't need them handy. Then I have some bigger pieces on the bottom like the big slow cooker and my lunch bag. Plus, the girls know which cabinet their treats are in, so those stay put as a book end,

This is so much handier that storing them in the living room, and it forced me to sort and store a lot of extra stuff. Plus, I just love the way it looks! Is it bad to sit in front of open cabinets and just smile? I hope not.
Around the House