I Choo-Choo Choose You! 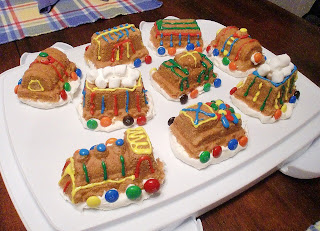 I just had to share my husband's culinary skills with you today. We received the choo choo train NodricWare cake pan as a gift from Danny's parents. They're visiting us for a couple of weeks, and he wanted to do something very special for them. 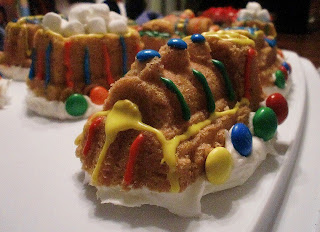 Using his new mixer, Danny made a delicious yellow spice cake, the batter of which was just as yummy. (Yes, I can vouch for this!) Then he made a knock-me-over-with-a-feather butter cream frosting! I can tell you a closely guarded secret that there is a little left over in the refrigerator, but it won't be there for long.

After the cake was baked, he trimmed off the bases that had overflowed during cooking. This was phenomenal because we ate those cut-off pieces with extra decorations later. Then he used the frosting to anchor the train cars to the carrying case base, so now they look like they're traveling on little clouds. 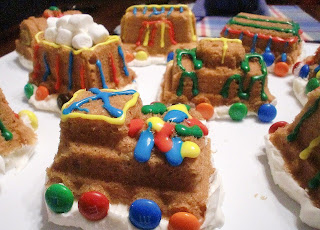 Danny is very detail-oriented, so the decorating of these little cakes was the perfect task for him. He used two kinds of M&Ms (plain and peanut butter) for the wheels. The cars are filled with marshmallows and the colors are writing gel. It was so much fun to watch him turn plain little cakes into edible works of art.

Thank you for sharing your time and talent, Sweetheart!
Cooking