Over The Backyard Fence 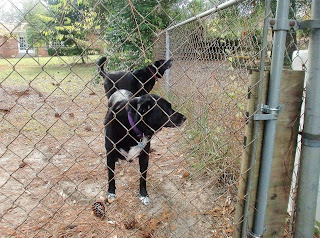 Bailey is my protector. The big dog is the one who stays at the front door and the windows, watching for potential danger. She's the one with the deep growl and the threatening bark.

She's also the one who loves belly rubs more than life itself. She's the one who will whip you with her lab tail while she shakes with pleasure over your mere presence. She's content to curl up with her head on my leg and drift off into a nap knowing her human is safe.

I'm convinced that part of our calling to keep the home is protecting our pets. Bailey protects me above all else, and it's my responsibility to make sure she is safe and secure.

Last weekend I was working in the far end of the house when I heard Bailey barking. She was outside in the beautiful fall weather, so I assumed she was chasing squirrels. They love to torment her, and I don't think she really minds it all that much. So I worked my way to the back door to return our neighborhood to peace and quiet.

I called to her from inside the mud room, even before I got to the door. Normally she will come right through the doggie door on the first call, but this time she didn't. The barking continued and I heard something else that made me broil.

The little boy next door and his little friend were kicking the fence between our two houses, making Bailey run and bark. I'm honestly surprised that the section of fence they were kicking didn't come out of the ground and go flying, they were kicking so hard. They were within inches of my dog, and she was just as irate as I was.

Now, I don't mind if neighborhood children want to play with my dog. She is the sweetest thing in the world and after some initial introductions is your friend for life. But Bailey is very protective and must have thought that these two boys were trying to get into our yard. What hurt my heart is that she probably didn't know they were targeting her, not the house.

So I called again and she came running. I took a deep breath and said a quick prayer, then opened the door. As I was stepping out onto the back step, I heard the little friend say, Wait until she gets quiet and then kick it again! Another quick prayer...

With all the calm I could muster, I spoke up so they could hear me and I said, Hey guys...could you please not kick the fence at my dog? Thank you. And that was it.

There was a little mutter of something unintelligible, so I went back in the house. For the next day or two I was very careful not to leave her out by herself and I found myself checking that yard constantly to see if they were there. My protective instinct was just as high for Bailey as hers normally is for me.

Our homes are our castles and sometimes we have to defend the kingdom. It can be done without a single weapon if we're careful and prayed up. That's a personal choice and one that can make all the difference in a chaotic one full of barking dogs and terrorist children or a peaceful one marked with compassion.
Pets

May 15
Today’s reading:Nehemiah 10-13
Thought for the day: Since the writers of the Old Testament began documenting their history, worship of the Lord has always included music, like today's description of gladness, thanksgiving and singing with instruments. My prayer today is that we will worship, individually and as the church, with hearts overflowing with music.