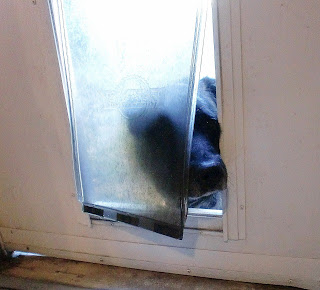 When we moved into our new house a year and a half ago, the doggie door was part of the package. I was all excited that the girls (Bailey especially) would be able to be outside when it was nice and come in for water and belly rubs whenever they wanted.

And then reality set in - we had an indoor cat, and the idea of her exiting the same way never to be heard from again didn't sit well. So the cover stayed on the doggie door and the girls were none the wiser.

So this summer when the cat went to her new forever home, it hit me. We can open up the doggie door and give the girls a treat! They can have a little freedom and I wouldn't have to be constantly getting up and down to let them out.

Now, our girls had never even seen a doggie door, let alone understood the concept. We've taught them that they need permission to go outside, eat, go for a walk or greet people at the door. This keeps us in control of the situation instead of getting over-dominant dogs.

The fun part was just teaching them that the door moved. Sadie didn't care because she's our indoor princess, but Bailey was in awe. She'd love outside if she could, coming in occasionally for love and food, so this was her cup of tea. It only took a time or two of calling her name from either side for her to understand that she could come and go as she pleased - within reason.

Sadie, on the other hand, is an entirely different story. She hates that door almost as much as she hates being outside without us. She doesn't seem to understand that she can open it herself, so she'll sit outside peering in until she can't stand it anymore. She'll bark a little to summon me and I'll have to pull the doggie door back for her or open the door completely.

The best part is when I don't get to the door quickly enough. Bailey gets annoyed with Sadie's whining and barking, so she'll come in through the doggie door. Sadie will follow her anywhere, so she'll come in right behind her. Then Bailey turns right back around and heads outside again. What a dutiful big sister!

Today is another beautiful fall day in South Carolina, so I know I'll hear that doggie door swing several times today. I'm so blessed to have the sweetest puppies ever, so if a dog-sized swinging door is all it takes to make them happy, it's music to my ears.
Pets