Three Girls and Their Toys

April 10, 2010
This is our girls' toy basket. We don't keep them all out at once, but this is exactly how many fun stuff our pets have to play with. They have their favorites, as I'm sure you're animals do too. Here's just a sampling of what's in ours. 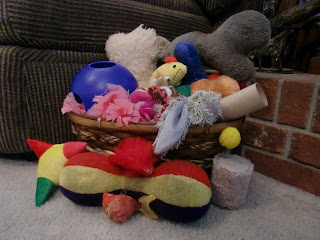 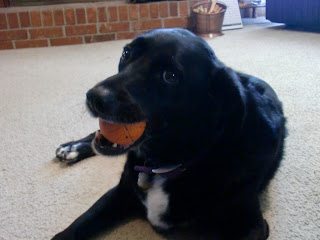 This is Sadie's basketball. She loves anything that rolls. It used to be one of my favorite shelf-sitters (I've had it since junior high) but she has more fun with it. 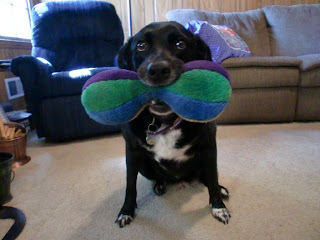 And then there's her squeaky toy. Sadie has severe hip dysplasia in both back hips, but she;ll hoist herself up every time just to go fetch this. 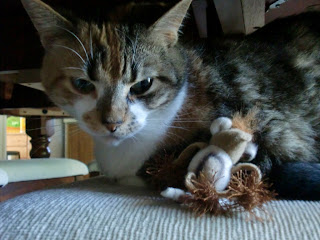 Cayenne would actually rather play with a bottle cap or a paper towel tube, but she'll cuddle with her bouncy mouse on occasion. It used to be attached to a pole for teasing your cat, but she did away with that. 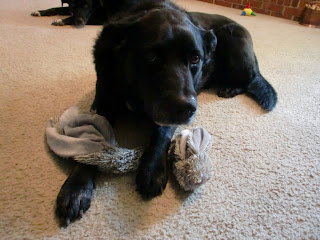 Bailey just got this adorable bunny. She's a huge fan of fluffy animal toys, especially Mr. Squirrel, but we're trying to get her to branch out. She'll take it to the door when Danny comes home, apparently as a bribe to keep him from leaving again. 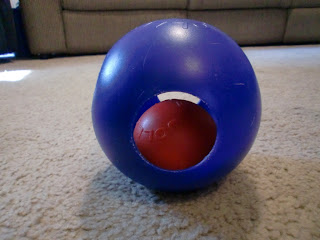 This is one of my favorites. Sadie still hasn't figured out that the little red ball doesn't come out...ever. It may be a little frustrating for her, but I think it's fun to watch. 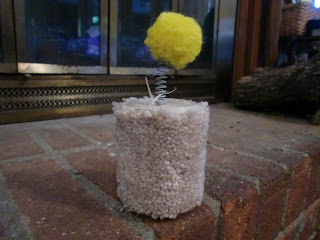 While she has a big scratching post in the dining room window, this miniature one will keep Cay's attention for a couple of minutes. 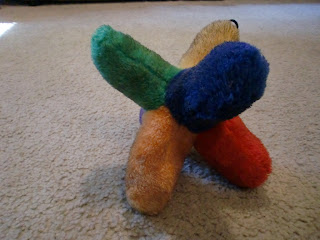 This is Bailey's all-time favorite toy. I think it looks like something on Normandy Beach, but each of the points squeak, so she'll carry it everywhere making noises. 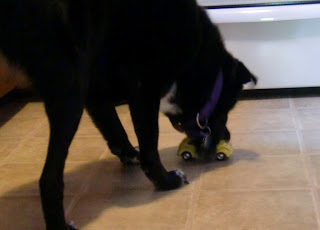 This is another great one to watch. It's one of those cars that drive themselves when you pull them back. I think it's the sound that really gets her attention, and then she'll carry it off to keep me from sending it out again.

It's great to have a variety of play-things around for the girls. We rotate them every couple of weeks, though, so they don't get too bored. There's nothing worse than a bored Labrador!