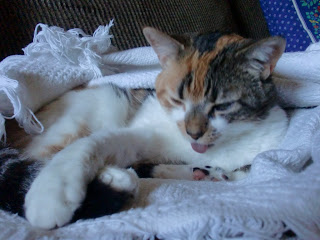 Cayenne has been through it over the past couple of weeks. You can tell by this picture that she wasn't feeling well - true, she often looks at me similarly, but this wasn't because I had bothered her.

While we had company two weeks ago, we made the mistake of changing Cay's litter box that same weekend. Not only was she dealing with the addition of another person around the house, but she was more than a little miffed about her special spot being violated.
One of the pet companies has come out with a litter box system that does away with the tiny little granule litter and replaces it with larger pellets. This is a fabulous idea for those of us who don't want to clean the mud room floor every day, but not a great idea for a three-year-old kitty who violently rejects change.

So...long story short, she found a couple of other places for a litter box. Very not good when you have guests staying in the house. She was perturbed to the point of banging on closed doors, meowing constantly and doing her business wherever she felt like at the time. Cranky kitty is an understatement. We were seriously considering finding her a new home, but that broke my heart. The topic was quickly changed amidst a flood of tears.

On top of the obvious intrusion on her personal life, we also found out that she had a urinary tract infection. (Which explains a couple of the places she was doing her business.) So we put her on antibiotics for several days, which seemed to do the trick.

And in a last-ditch effort to set everything aright, I changed her back to her old litter and box. The change in her personality was like night and day. Apparently that was the precipitous of all the problems over the past two weeks. She used her box within about half and hour and we've been right as rain ever since.

So, to conclude, unless you want anarchy in your home, never change anything without first consulting your cat. It will save time, money, energy and your sanity. But apparently the cat doesn't care about any of those things. She cares about comfort, stability and being admired for the beautiful kitty she is.
Pets