How Is God Showing You His Strength Today? 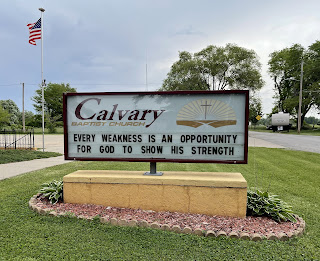 Sometimes God gives us little nudges to let us know where He wants us to be and what He wants us to do and say. Those are those moments when fellowship with the Lord couldn't be sweeter.
And then there are times when He stops me right in my tracks and lets me know, beyond a shadow of a doubt, the lesson He wants me to learn. Those are the moments when He does whatever it takes to get my attention.
Do you have those moments, too?
Weakness is usually seen as a negative characteristic. We don't want to ask for help because that means we can't do things for ourselves. We can't have anyone think that we're not perfectly capable. We don't want to be picked last for the team just because we're not particularly athletic. (Yep, that's me.) Not being good at something means we're weak in those physical skills that other people have in abundance. And we definitely don't want to appear ignorant, showing that we're mentally weak and not able to comprehend or perform like everyone else.
But God says He can use weak people is mighty ways.
And he said unto me, My grace is sufficient for thee: for my strength is made perfect in weakness. Most gladly therefore will I rather glory in my infirmities, that the power of Christ may rest upon me. 2 Corinthians 12:9
Paul had been praying about a thorn in the flesh that he felt was holding him back. We don't know exactly what that thorn was, but it was serious enough that he prayed repeatedly that God would take it away. But God's response stopped Paul in his tracks and changed his perception about how God sees our human limitations.
God's grace - giving us what we don't deserve - doesn't have to be given if we're strong enough on our own. Our pride often lies to us and tells us that we should be Christian enough to handle whatever this situation is by ourselves. The truth is that we're completely incapable of anything apart from God's grace and strength. Paul believes God has given him this thorn so he won't be exalted and so prideful that he would believe his ministry was all about him and not about God. Pride is a nasty, ugly thing, isn't it?
Instead, God tells Paul to embrace those weaknesses because they will give Him all the opportunities possible to show Paul, and the world around him, how great God is. When we remove ourselves from the equation, the spotlight falls completely and entirely on what the Lord can do in and through a surrendered heart. Then we reap all the blessings of knowing that we've been used by God Himself to change the world.
What are your weaknesses today? Are you struggling with them, or are you accepting that this is how God is choosing to use you right this moment? This is a huge truth, that our weakness can actually be a tool to bring God honor and glory while touching the lives of your friends and family. Paul said he would rather glory in his weakness if it meant being willing to show someone the power of Christ in his life. My prayer today is that we'll each have this same mindset, throw our pride out the window and ask God to use whatever we perceive as weakness for a show of His strength to all the world.
Scripture