It's All About The Christmas Music! 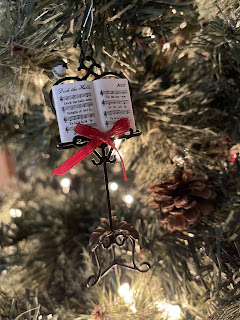 Christmas is a magical time for musicians. The hymns and carols we play and sing are full of Biblical truth. The melodies and harmonies are some of the most beautiful we will play all year. And spending the Christmas season with our church family rehearsing and playing creates a special bond between brothers and sisters in Christ.
Then there are those who look forward to hearing Christmas music every winter. They may not play an instrument or enjoy the sound of their own voices, but they make a joyful noise every time they hear their favorite hymns. These songs live in our hearts all year long, and we can't wait until we can sing them together as a church family.
We're really just following the example of those who were part of the first Christmas story.
And Mary said, My soul doth magnify the Lord, And my spirit hath rejoiced in God my Saviour. For he hath regarded the low estate of his handmaiden: for, behold, from henceforth all generations shall call me blessed. For he that is mighty hath done to me great things; and holy is his name. And his mercy is on them that fear him from generation to generation. He hath shewed strength with his arm; he hath scattered the proud in the imagination of their hearts. He hath put down the mighty from their seats, and exalted them of low degree. He hath filled the hungry with good things; and the rich he hath sent empty away. He hath holpen his servant Israel, in remembrance of his mercy; As he spake to our fathers, to Abraham, and to his seed for ever. Luke 1:46-55
In what is known as the Magnificant, Mary sang her heart out to God. She had just learned that she would be the earthly mother of her Savior, and she was visiting her cousin Elisabeth when the extraordinary happened. Elisabeth's unborn baby leaped as Mary (and Jesus in the womb) came into the room. Having humbled herself before God and asking Him to use her as His servant, she was overwhelmed with the need to thank and praise Him.
The result was a beautiful song that came straight from her heart. She magnified God with her words, thanked Him for choosing her and using her, gave testimony of His greatness and praised Him for His grace and mercy. There is no more beautiful hymn than one that gives God His proper place in our lives, and that's what Mary wrote that day.
And there were in the same country shepherds abiding in the field, keeping watch over their flock by night. And, lo, the angel of the Lord came upon them, and the glory of the Lord shone round about them: and they were sore afraid. And the angel said unto them, Fear not: for, behold, I bring you good tidings of great joy, which shall be to all people. For unto you is born this day in the city of David a Saviour, which is Christ the Lord. And this shall be a sign unto you; Ye shall find the babe wrapped in swaddling clothes, lying in a manger. And suddenly there was with the angel a multitude of the heavenly host praising God, and saying, Glory to God in the highest, and on earth peace, good will toward men. Luke 2:8-14
Can you picture the worship service that night in that field? The angel of the Lord would have been enough for those shepherds to last a lifetime, considering they were just doing their job and minding their own business. But then, as the angel finished his announcement of the Savior's birth, a multitude of heavenly hosts joins him. And what happens when the joy of the moment overtakes them? They join in the most beautiful song - Glory to God in the highest! Glory! Glory to God! Glory to God in the highest! They gave God the honor with their voices and praised Him with their music.
If the angels absolutely have to sing and make music out of their joy, how much more should we, His children saved by His grace? Regardless of our "talent and ability," music flows from us naturally, just as it did at the first Christmas celebration. Over the next few weeks as you sing in worship services and enjoy performances of all kinds in your community, let your heart overflow the way Mary's did. Let them praise God the way the angels' did. Then share your own verses as they intertwine with music made more than 2000 years ago.
It's all about the music at Christmas.
Christmas Scripture

June 26
Today’s reading: Psalm 84-86
Thought for the day: The margin of my Bible next Psalm 86:3 says I cry unto the Lord daily may also be read I cry unto thee all the day. Are you sending up prayer daily or all the day, solidifying your relationship with Him?