Angels Standing In The Presence Of God 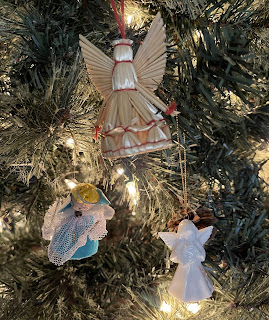 We read about angels all through the Bible, cringing when they bring bad news to evil-doers, cheering when they bless the righteous and rejoicing when the proclaim the arrival of the newborn King!
Did you know that only three angels are named in the Bible? Gabriel is the messenger angel, speaking to just about everybody involved in the Christmas story. Michael is the warrior angel, who fought Satan for the body of Moses and will lead the battle of Armageddon. And Lucifer, the banished angel who decided he would be better than God Himself. Praise the Lord that I will never see him face to face, since just seeing his evil work in the lives of people I love is bad enough.
To be honest, I hope I get to meet Michael one day. We don't really know what the angels will look like, though Scripture does give some basic descriptions. I'm curious about how this warrior for God will look and what stories he will tell about the battles fought.
And then there is Gabriel, the magnificent messenger who brings awe - and a little bit of fear - as he brings God's word to Jesus' soon-to-be-family. He first speaks to Zacharias about the child he and Elisabeth will have in their old age, going so far as to tell him the name he will give him. John will be a powerful messenger himself, speaking God's word of Christ and salvation to all who would believe.
But even in this miracle of speaking to an angel, Zacharias has his doubts, questioning Gabriel about his truth and sincerity.
Whereby shall I know this? For I am an old man, and my wife well stricken in years. Luke 1:18
Ignoring for the moment that Zacharias just insulted his wife in her old age, he also threw excuses at Gabriel. How can I believe this? I'm old! She's old! We're old!
Gabriel's response stops me in my tracks every time.
I am Gabriel, that stand in the presence of God; and am sent to speak unto thee, and to show thee these glad tidings. Luke 1:19
I am Gabriel, and I stand in the very presence of God. I have stood in His throne room, bowed at His feet and carried the message from His lips to your ears. That is all you need to know, Zacharias, because my mission is to do God's will, not convict you of your unbelief.
So for the next nine months, Zacharias would be mute, not able to speak with anyone in his own voice. Verse 22 says that he could only gesture at them, remaining speechless until the day of John's birth. How interest that the father of the man who would speak God's word, paving the way for His Son, would be struck dumb. I wonder if he ever doubted God's word again. I would think not.
While we may not be visited by angels in the days to come, we will be asked to receive God's word with open hearts and open minds. It may be our human nature to question, to doubt and to make excuses about how we really can't do what we're being asked to do, but those are the moments when we can remember where the message is coming from. If the Lord's word is coming to me today directly from His throne room, I want to be ready to grasp it with both hands.
What messages is the Lord sending you this week?
Christmas Scripture