Scarf Storage That Isn't A Hanger 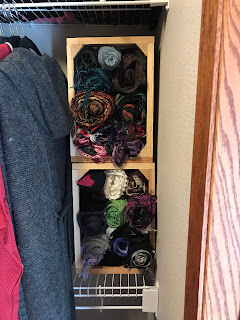 When I heard the crash, I had no idea what it could be. The dogs were all in the front of the house with me, so it couldn't be them. (A surprise, I'd have to say.)

A quick trip to the walk-in closet showed exactly what happened. One of the hangers I used to organize my scarves had broken, and the other one was cracked and about to break, too. The crash happened when the hanger gave way.

Suffice it to say, I have a lot of scarves. This was the first week it was cool enough to wear one, and I practically kicked up my heels. I could go for several weeks and not wear the same scarf twice. It's not an obsession, I guess, just something that makes me happy.

But what didn't make me happy was cleaning up a pile of scarves off the floor. Using a hanger obviously wasn't working that great, so I headed in a different direction. 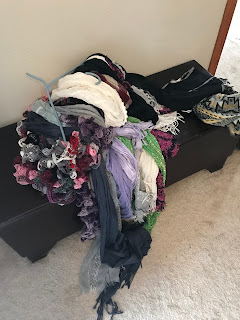 We are in between craft shows, so I used two of the small crates from our display to get all those scarves organized again. They were the perfect size, each holding half of the scarves. I don't like creases in anything, including scarves, so they're rolled and stacked in the up-turned crates. Now they're easy to access and pretty to look at.

This layout for my side of the closet works perfectly - I can see what I have at a glance, and they're in no danger of falling again. Or being swept up in the vacuum. Or being eaten by a puppy. It's a win-win-win-win situation!
Around the House