Lessons From Job: Lying And Hypocrisy 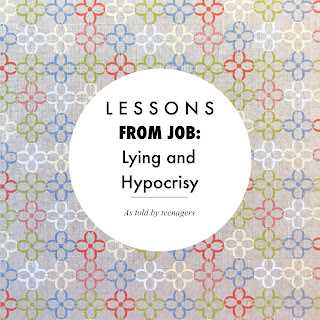 As Danny and I have been leading our youth group through a study on the book of Job, we've gotten through an in-depth look at the first 17 chapters. We read almost verse-by-verse through each section, looking at the underlying themes and problems that happen in the storyline.

One that really stood out to everyone recently was the theme of hypocrisy. Or the lack thereof, when it comes to Job's life.

Our youth group has a group text that we use to let everyone know important info during the week. This particular Wednesday I texted them to look up the word "hypocrisy" and be prepared to define it and explain that definition in their own words. It was the first time we had tried this, and it worked even better than we'd hoped.

Hypocrisy is putting on a false appearance of virtues, morals or religious beliefs. In other words, you expect other people to follow your standards, but you don't follow them yourself.

My example for this concept was this: If I told you that you needed to be in church every time the door was open, but I only came every few Sundays and to an occasional fellowship, that would be hypocritical. I may have sounded like I had strong religious beliefs, but I didn't apply them to myself.

As we started reading through Job chapters 8-10, the teens quickly identified the hypocritical behavior ... and it wasn't in Job's life.

In the first 7 verses of chapter 8, Bildad picks up where "friend" Eliphaz left off, accusing Job with nothing to back it up. "If you would just seek God, if you were just, pure and holy before Him, all these bad things would stop happening. You MUST be sinful if God is allowing all these things to happen in your life."

Reading back through the first two chapters of Job, there is absolutely nothing to indicate that he had sinned. He was described as upright, blessed, consistent in prayer and hating evil. When bad things happened, he continued to worship God, even when his own wife encouraged him to curse God and die. Where is the hypocrisy in these words? Where is the false appearance of saying one thing and doing another? It's just not there.

Once we understood this truth, we dove further into the effects of true hypocrisy. We asked the teens how Bildad's false accusation of Job's hypocrisy changed Job's situation. The truth, they decided, was that it did nothing but hinder Job's circumstances. He was already inconsolable, and there was no basis whatsoever for Bildad's words.

Only when hypocrisy is pointed out - IN LOVE - can it be a blessing. In any other instance, it can actually be a stumbling block to other people. If a Christian says that a certain action is wrong but does it themselves, what kind of picture does that paint for the unsaved? "Why should I give my life to Jesus Christ when Christians act no differently than I do?"

This is the sad portrait of a hypocrite. Our testimony is at stake when we proclaim to be a Christian. We are being watched and studied all the time - by other Christians and by the lost. When our hearts and lives are right before God, then we can be a positive, godly influence on the world around us.

I pray that we will each check our hearts today, just as our teenagers did, and see if there is any place of hypocrisy there. We can be so much more effectual in our Christian walk when we're not weighed down by the baggage of putting on these false appearances. Let's walk the walk as we talk the talk.
Scripture