The Do's and Don'ts On Donuts 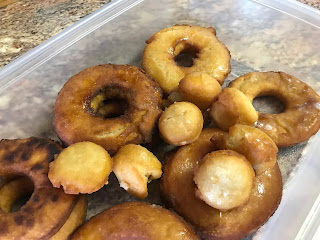 Donuts always take me back to my childhood. Growing up I always had a different kind of donut with my cereal and banana each morning. My favorite is still a white cream-filled long john, although I really like apple fritters. And cake donuts. And all the ones with cream inside - not pudding, though. The white fluffy stuff.

Ok, so pretty much all donuts. I'll admit it.

Making donuts at home is super easy, and I've shared several of my recipes with you here.

* baked doughnuts with cinnamon and nutmeg

Whether you spell it donut or doughnut, or you like them baked or fried, they're a great treat - and not just at breakfast!

Here are just a few tips I've learned from my adventures in donuts.

1. When you're baking donuts, don't overfill the pan. If you do, the bottoms fill up and you lose the hole in the middle.

2. If you're putting a crumble on top, dip it in the butter immediately or the donut will crust and nothing will stick.

3. Before frying donuts, put them in the refrigerator for 20-30 minutes. When they're cool, they hold up to the hot oil better.

4. When heating fry oil, regulate the temperature before you put the donuts in, otherwise the oil will continue to heat and you'll over cook them in a matter of seconds.

5. Allow donuts to cool completely before topping with icing. When you get in a hurry for this part, the glaze will all run off because it's too warm.
Cooking